Disabled to Co-Host of Keepin’ It Real

My experience with Cerebral Palsy has been very interesting. Being born with something I had no control over has given me a deeper insight into the “human condition.” I have overcome a lot of obstacles. I felt very insecure about myself. So much so, that I wouldn’t wear any shorts during the summer because they would show off my orthopedics.

Have you ever walked down a hallway with people staring at you? Thinking to yourself “What are they staring at?” You get the feeling as if you’re being judged before they even get to know you. Then as you walk up to them they look down pretending that you’re not even there. You try make an effort to be a part of the conversation that’s going on yet they just shut you entirely out. Then you go throughout the day, thinking to yourself ‘those people don’t like me because I’m different’ that’s happened to me.

When I was  born with Cerebral Palsy, the doctors told my parents within 2-3 weeks. Cerebral Palsy is a mental and physical disability. From what my parents and grandparents have told me you can’t “catch” Cerebral Palsy. You’re born with it, therefore it’s chronic. Here’s my story. One day, my grandmother came into my hospital room and found that my legs aren’t moving at all. I was on an incubator for about two months. The incubator works like this, there is a balloon attached to the machine that controls your breathing. According to my parents, I could only fill up half of the balloon on my own. Because of that, it caused a lack of oxygen to my brain. From that point on I have lived with Cerebral Palsy all of my life.

One of the questions that I have always asked myself is “Why?” In 2009, I wrote article entitled “Disabled: Different and Proud of It.” Throughout that article I addressed the reason to asking that question. To this day, that is still the one enigma that I can’t seem to get an answer for.

When I was in elementary school, I was the shy kid who didn’t talk that much. I was very quiet and mostly kept to myself. At the age of 5 years old, I met my best friend David King. He and I first met in 1992 and then I moved to Naugatuck, CT in 1997. I was 9 years old at the time. We didn’t see each other for 13 years. In 2010, we met back up through a mutual friend named Craig Vansteinburg. From that point we were inseparable. Now we’ve known one another for over 20 years.

High school for me was at times intimidating. I was worried about the entire experience. I didn’t know how the kids were going to take to me having a disability. Never mind the peer pressure to “fit in” with the regular crowd. I wanted to be in the popular crowd or at least be considered as one of them. But it wasn’t until junior year, that I figured out “why fit in when you can stand out?”which was another topic I talked about in depth with my previous article.

There are many instances in school that I remember being teased or made fun of. I remember being called the “crippled kid” behind my back.  One day I went to the school candy store and asked one person if I could get a candy bar before we all went to lunch. The person said to me “Sorry, We’re closed.” I asked him again and he pushed me and I fell down with all of my books falling out of my hands. I then proceeded to get back up and put my fist to his face. A teacher walked by and said “Is anything wrong here?”  I said “No.” Then I walked away.

Later that day, I went to my guidance counselor and as we were talking the teacher that stopped me came into the room. He asked me, “Do you want the student who pushed you to be reported to the main office.”  I shook my head, “No.”

When it came to getting a date in high school, I wasn’t the Jock. I made friends with a lot of the upperclassmen and  freshmen.’ At times I would drift between social groups. I never had a girlfriend in high school. Also I never was as they say “popular with the ladies.” I had a lot of crushes on certain girls, but I was always too nervous to speak to any of them. But I think by junior year everything seemed to pan out for me. People knew who I was and I felt good about myself. I went to Junior Prom and Senior Cotillion without a date. At the time I wanted to go to a dance with a date, but as I said before I lacked the courage to ask any girl out.

In 2007, I entered Housatonic Community College. I have to admit the first day I was extremely nervous. Being put into a new environment, with different people was very daunting for me. As I got through my first semester I realized that most people didn’t care about my disability.  At that precise moment it was overwhelming for me, because I didn’t have to explain anything at all. Occasionally, questions would arise as to what I had, but for the most part the people at college accepted me. For once I was considered to be part of the regular crowd.

It’s when my first group of friends graduated that I realized, “This isn’t like home anymore.” Since then I have made some mistakes as does anyone, but I’ve tried to learn from most of them. I’ve come back to school with a new mindset and focused on my schoolwork. I now am writing for the Horizons newspaper, which I find to be refreshing.

I have also made various personal achievements in my life. Last March, I got in contact with The Kennedy Center out of Trumbull, CT. Through them I contacted BRS (Bureau of Rehabilitation Services) who help people find employment. Through BRS I met Mark Primavera. He helped me in taking the public bus system, so I could get back and forth to school. At the time even though it was learning how to get to and from one place, it built one key element that I seem to lack and that was confidence.

In April of this year, my best friend David King was offered the position to host his own television show called “Keepin it Real.” This was after he had done guest spots in two other shows for a year and a half. He came to me early and said “Hey Freddie, do you want to be my co-host?” I have to admit at first I didn’t want to do it because I was nervous. I ultimately thought I would make him look bad. 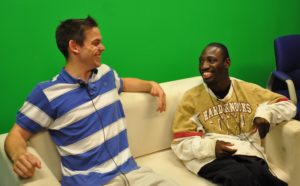 The author (left) and his co-host on set. Photo by Anson Smith

A few months ago, David asked me to go on his show. Once again I was nervous. The episode we did included an interview with myself and what it was like to be disabled and go to college. According to David’s boss, the show went well. So well, that it had gotten good ratings. It was the most watched episode of his show at the time. Then David came to me again and said, “So, do you want to be my co-host?” I said to him, “Give me a week to think about it.” I went home and asked my father for his advice. He said, “Freddie, you’re going to help your friend out with his show. I think you should do it. Because it’ll help you be social and get you out of the house more. Know that you’re going into something that’s totally different than what you’re used to. Listen and learn to gain as much experience as you can. ” I went to my Aunt Judy and she told me, “Freddie, you’d be stupid not to do this. Because you’ll be able to get your name out there and network.” I agreed with her. By the end of the week, I gave David his answer.

On September 2, 2014, David and I went down to the studio as usual to do his show. I had called Mark Primavera and his coworker Margaret Mixion to appear on the show to offer their perspective on the issues most disabled people deal with on a daily basis. A few minutes before showtime, I got a phone call from David saying he missed the last bus to get to the studio. “If you can do the show Freddie, go do it.” In short, I was nervous at the opening and I didn’t close the show well. But in the middle of the show itself my nervousness seemed to calm down. All in all, David came at 4:00 p.m. and says to me “You’re now officially the co-host.”

To be honest, I’ve never really gotten out that much nor been that social. So to do a show like this has been a dream come true. It’s broken so many barriers that I have had up my entire life. It almost looks like as if it isn’t me on television. Like it’s another side of me that is now being shown to the world. I am very proud of myself for doing something out of my so called “box.” I only hope that I can become better as time permits.

I posed a question earlier that I keep asking myself from time to time. That is “Why?” I’ve realized that there are somethings in life that you don’t have the answers for. Now having a few years of college under my belt, I’ve been happy in just being myself. I’ll admit at times that I still get down on myself about things and get depressed for some reason or another. But I still try to do the best and be the best person I can be at the end of the day.

You all can watch the show on channel 88 on Wednesdays at 8:30p.m.  We encourage all of you to watch and tell us what you think of the show.