For HCC counselor Linda Wolfson, counseling is not about giving advice. 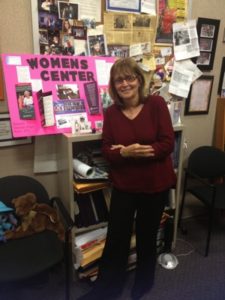 “It’s about supporting people as they work out their own issues with the support of a non-judgemental, caring person,” says Wolfson, who has been a counselor at Housatonic for a remarkable twenty-two years. “I have learned so much from the many students that I have worked with and I believe it’s a privilege that they share their issues and thoughts with me.”

She spends part of her days counseling students in her office in Lafayette Hall A108g, but Wolfson’s role doesn’t end in her office. She is also very active in the goings on at HCC. This can be attributed to her fascination with the study of psychology as well as being a self-professed devotee of public education.

For example, Wolfson is coordinator of the Women’s Center. As such she is involved in weekly meetings, communicating between the diverse members on the board, and ensuring that the center is run smoothly on a daily basis. Along with being a safe space for students and filled with resources on women’s issues, there is a  support group. SOFA, an acronym for “Speak Our Feelings Aloud,” which addresses topics relevant to members and the college population at large.

Fourteen years ago Wolfson was approached by a student looking to set up a GSA (Gay-Straight Alliance) club on campus. Wolfson has been an advisor since the UNITY club’s inception.

“The students are very committed. [They] work had to make everyone feel a part of the club.” Wolfson says. “I am very proud of UNITY.”

She adds that she gets a lot out of supporting students who meet with her.

“It is a very rewarding job.” Wolfson says, smiling.

Yet Wolfson believes her work is different from being a good friend or a supportive family member. The art of counseling is very different.

“It is a skill one has to nurture with understanding that it is about the client,” she says.