The Haunting on Lindley Street

As summer fades  leaves change from green to shades of orange, red, and brown. Another scenic chilly fall descends upon us. This is a time when the days get shorter, the nights get colder. At this particular time of year many have claimed unusual sightings and other interactions with spirits and ghosts.

Hauntings, or frequent, unsettling visits from ghosts or spirits, have been popular in horror movies and have left an indelible mark in the minds of those preparing for Halloween.

One of the most famous documented hauntings occurred in Bridgeport in 1974, just two miles from Housatonic. 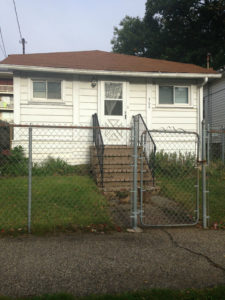 The House on Lindley St., where the Goodin family, and over 100 others, witnessed the paranormal events in 1974. Photo By Jena Fracassini.

According to Jay Lederman, a reporter for Monroe Patch, there were over 100 witnesses to the paranormal activities that occurred on Lindley St. that year. Thousands gathered outside of the home, cutting off traffic for blocks as these events unfolded.

The Connecticut Post described Gerard and Laura Goodin as  mourning parents who had tragically lost their 7 year-old son to Cerebral Palsy. The Goodins decided to adopt a little girl, her name was Marcia.

Mr. Goodin was a Hubbel Factory worker,  his wife Laura, was as a devout Roman Catholic. Both parents, because of their recent loss, were very protective of their new daughter Marcia.

When Marcia first moved in with the Goodins strange things began to happen in the house. These strange occurrences soon escalated to dangerous proportions. The most famous of these events happened on November 24, when the Goodins called the police, claiming “strange things happening in the house”.

When police and firefighters arrived, they were terrified by what they had witnessed. Many witnesses recall seeing a refrigerator floating about a foot off the floor; others recount a television floating and turning in circles; furniture, some say, would fly at Marcia whenever she walked into a room; the orange and white cat, Sam, would fling profanities to those close enough to hear him.

Ed and Lorraine Warren, famous paranormal investigators originally from Bridgeport, CT, were called in to investigate the strange goings on. The Warrens still have pieces of a crucifix that burst apart in the home.

On November 26, after crowds from around the country flocked to the home, Bridgeport Police Superintendent Walsh announced that the whole thing had been a hoax. He did not produce evidence of this trickery, and it did not do much to quench the public’s uneasy feelings about the matter.

Ed and Lorraine Warren’s website reveals an interview with Reverend Bill Charbonnaeu, an expert on occult and paranormal. He says, “I know the things that I saw and the things the police saw, in my presence, and it was real”. He claims he was threatened with an arrest by Walsh, the police superintendent, if he returned to Bridgeport, for his disbelief in the hoax would amplify residents’ fears.

Now, approaching the 40 year anniversary of the haunting, residents of Bridgeport can still recall their fears of the paranormal events.

Joe Lenzen, who grew up a few blocks away from Lindley St, was only 6 when the hauntings began. He remembers how everyone was so scared for themselves and their children, how nobody wanted something like this to happen to them.

William J. Hall, a magician and author, published a book about these hauntings, titled “The World’s Most Haunted House”. He began researching the events further after listening to recordings made by Bridgeport Police, and interviewed over forty witnesses to prepare for the publication. His book recounts the interviews and provides first-hand details about the events.

Even after forty years, this haunting is still vividly remembered and talked about. With Halloween right around the corner, one might wonder what other spooky happenings are occurring around Housatonic.