It’s the Most Political Time of the Year!

With Election Day right around the corner, you’re probably asking yourself what you can do to become more politically involved. Right? Well it’s never too late to start.

Don’t beat yourself up if you’ve never registered to vote, let alone actually voted. Join the club.  According to a poll conducted by the Pew Research Center in 2012, only 50% of people aged 18-29, registered to vote.  This age group is less likely to vote because young people tend not to pay attention to politics, say they’re too busy, or simply don’t have an idea of how to vote in an election. 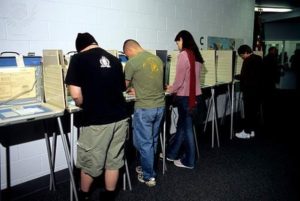 These people are voting, why aren’t you? Photo by David R. Frazier for Universal Images Group

As students, we often forget that our voices matter. We’re taxpayers, so why don’t we make sure our money is going to support the issues important to us? Voting in a federal, state, and local election is an effective way to make sure things are getting done the way we need them to be. Rapper Biggie Smalls said it best: “We can’t change the world unless we change ourselves.” His words still ring true; if we want things to go a different route, we must be willing to change our habits.

So first things things first: register to vote! In this day and age doing so can be as easy as 1-2-3, providing you have the proper documentation. To be eligible to vote in Connecticut you must be  at least 17 years old, turning 18 before Election Day. You must be a US citizen and a Connecticut resident. If you’ve been convicted of a felony, the state requires that you be off parole for a period of three years. Online registration for the November 4th election has closed, but that shouldn’t stop you from applying anyway! (2016 presidential election, duh.) The Connecticut Secretary of the State website provides English and Spanish applications that can be printed and then mailed to the Registrar of Voters at your local town hall. You can also head down there on Election Day to register then vote in person.

Next up is to figure out who you’re voting for. This is pretty much the whole point! You aren’t required to affiliate yourself with a political party at the time of registry. However if you want to vote in the primary for a specific party, you must enroll as a member in the political party of your choosing when you fill out an application. Research is next. Picking a candidate is the most important part of the process. Knowing where your candidate stands on issues important to you determines who you’ll vote into office.  Maybe you want an official who is pro-choice or maybe you want someone who is in favor of reducing student loans. Paying attention to what they’re saying in debates and press conferences is a good way to start. Also research their opponents stance on issues; they might be biased, but you never know what truths you can discover. Plenty of websites offer unbiased, third party information about candidates and their accomplishments (or pitfalls). Votesmart.org and OnTheIssues.org are a couple sites that lend a hand in the research process. Remember: this is about choosing someone that’s going to help you. Think critically about each candidate and their proposals.

There are still young people out there who recognize the importance of political participation and actually do it. Herbert Koomson, a student , has voted several times in various local elections. On the issue of  voting he said, “ it is necessary and is part of what makes us contributing members of society.” Though he feels his “vote isn’t really counted” during the presidential election, he knows he can make his voice heard when he takes part in local elections..

HCC students can take advantage of the Student Activities office as a way of  getting involved in the school community. Voter registration cards are available there and emails will be sent to all students regarding volunteer work. This  type of work can be as simple as setting up a table or booth to assist others in the registration process.

“We need students to vote in these elections,” Kelly Hope, Director of Student Activities, said. She urged students to turn out in large numbers this year  because they need representation.

“Their vote still counts,” she said.