The Housatonic Student Life Office had a party at the Beacon Hall Event Center Wednesday October 22 to welcome students back to school and to help support a local men’s program through toiletry donations http://webbanki.ru/mikrozaimy.

Kelly Hope, Director of Student Activities, originally decided to have a “Welcome Back” party event for returning students (including transfer students and new students). As time passed, she then decided to team up with the Men’s Center and its outreach sources to help others in need.

“She chose this idea of having more than just a party here on campus. To make it something that would be more beneficial, not just for the students but for someone else. She tried to make it fun but purposeful, so you know a party with a purpose,” said Marlene Kinchen, a secretary in the Student Life Office.

The party was a massive event where people went to shake and move their bodies to their hearts content. Loud and booming music filled the air thanks to DJ Alkatrax, who also performed at the school’s previous Club Day event. In addition to these kind acts of students helping each other out, students also performed at this event. “The Housatonic Music Club open[ed] up [the show] before the DJ performed,” Kinchen said. 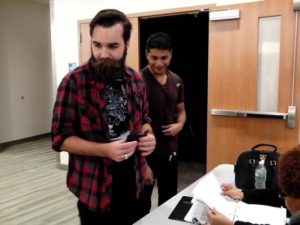 Martin (on the right) and his friend are heading into the party. Photo by Erroll James

Upon numerous other things, there was free food! It was open to Housatonic students who were interested in showing up and having a good time and donating. “That’s just something extra, if it’s your thing. If you like to donate or help people out, and if you’re interested just bring a toiletry and if not you can still go out and party,” Kinchen said.

“Because as small as it may seem these are really the main essentials people need every day. A lot of organizations that donate big stuff like food and clothing for people sometime don’t focus on the other things to get by like toilet paper, water, lotion. Just the minor stuff like that also count,” Kinchen added. The toiletry drive was optional to do for people who were interested.

The students who donated brought toilet tissue, lotions, shampoo, hand sanitizers, soaps, mouthwash, and other toiletry items that would help a person go through their day with good hygiene. Students came and dropped off their charitable items into a donation box.

Also, there was numerous other freebies that the school handed out. To make things even better, students were able to be entered into a raffle. The first 25 students that are registered in fall 2014 classes that arrived with the printed email reminder of the event from Kelly Hope (that she sent out on Tuesday before the event) got a secret giveaway gift.

For those students who were interested in dancing until they dropoed or helping others in need (or even both), dropped by and partook in the event.

“That party was lit!” said Ashley-Marie Welfare, a student that went to the event. She was glad she went and looking forward to the next big event at Housatonic.

“The party was a huge success. However, I wish more students would get involved,” said Hope.