Love: How to Make Relationships Last

With celebrity relationships ending on what seems like a daily basis and marriages ending within less than a year, it’s more astonishing to dig through the rubble of disappointments to find the marriages that are celebrating 20 or more years together.

It is possible that too many people call it quits due to unrealistic ideas about what a relationship should sustain based on what is portrayed on television, movies, and read in romance novels. Other factors could be that conflicting work schedules or hobbies take too much time away from your partner and can take a toll on the relationship if couples neglect time spent together. Left unchanged, sadly but surely the relationship will come to an end.

Yet, in the midst of all the failed relationships people are still remaining hopeful, embracing love and giving holy matrimony a try. In the United States alone, two million people get married every year, according to the National Vital Statistics found on CDC.gov.

Currently planning her dream wedding, Courtney McNill describes her relationship with her fiance Anthony Cole. She explained that whatever she went through in her past relationships she didn’t bring into this one because “all guys are not the same.” 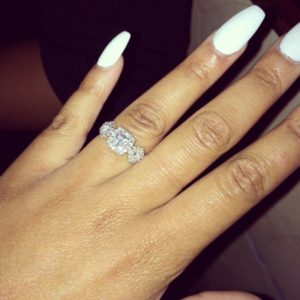 Similarly, Cosmo and Askmen.com said that it hurts a guy’s ego to hear about your ex and no one wants to deal with obsessive behavior because your ex broke your heart.  Grab a tissue and ice cream, then get over it.

And don’t be a slacker when it comes to “honesty and communication,” Cole said. “It avoids trust issues, and remember to tell your significant other that you love them everyday.”

He also advocated having a healthy and fun sex life.

“It is important to be active in the bedroom to express your love to each other on a deep, intimate, and emotional level because both partners have needs and it would suck if your partner finds that need and attention in someone else,” he said.

On the other hand, having an affair only makes things worse and damages the trust in the relationship and could lead to divorce. Take it from Wendell Troupe, Housatonic student, who said he remembered when his father cheated on his mother and how heartbroken she was.

“They are still together,” Troupe added, even though “they still have their problems ever since that unfaithful day.”

At the same time,“abstinence make the heart grows fonder,” stress management expert Debbie Mandel, MA told WebMD. “A few days off creates anticipation and eagerness.” So, save the moment for your partner.

Problems can also occur when social media and video games takes priority over the relationship. According to HG.org, created by independent law firms to provide legal advice, the American Academy of Matrimonial Lawyers saw 80 percent of divorces linked to an excessive use of social media. Another study done by Divorce Online said 15 percent of dissatisfied wives complained that their husbands put gaming before them.

Therefore, most women fear this addiction and find it immature about men. Cole, Courtney’s fiance, agreed that men should “never let an addiction come between the relationship whether it may be video games or social media.” Instead, he suggested, “try to do things with each other but also give that little space to let your women or man have there fun time.”

The reunited high school sweethearts and soon to be Mr. and Mrs. Cole may only be in their mid-twenties, but they are ready for a lifetime commitment. As they move into their new apartment in Texas, they both agreed on “never going to bed angry, it’s better to talk it out and solve the issue; and don’t bring yesterday’s drama into tomorrow.”

For those of you who have already made it to the aisle- Congratulations! Now all you need to do is honor your commitments; sounds easy, right? Except no marriage is easy. The beginnings come with emotional frustration, especially when living with someone else.

In fact, a recently married Texas resident, Casey Crump, can relate since she just moved in with her husband. “I noticed that he was a little more organized than I was,” Crump said. “I had to re-adjust and meet his standards of cleaning.” She laughed because she had no complaints about having a husband who liked a clean home.  She did, however, complain that their work schedule caused them to miss out on having dinner together most nights.

Thus, marriage and relationship expert, Winnie Martinkovic, PsyD tells her patients to “start  with one day out of the month for date night- no cancellations or interruptions- then gradually increase to once a week.” She also suggested that couples make a list of chores that need to be done, then randomly pick them from a hat to avoid complaints about who has to do what chore. Martinkovic also urged couples to hold an object, such as a pen in your hand to signify who is the speaker. This limits partners from interrupting each other. More importantly, using a calm tone and pleasant word choices when expressing yourself signifies respect for your partner.   These tips will help avoid unnecessary arguments that can tear a good relationship apart.

Given these points, try this method from the scenario below:

Her- I like to keep our home clean, especially when we have visitors. It would be helpful to me if you would put your socks inside the hamper.

Him- I’d rather be at home having dinner with you, but sometimes I have to work late. How about we set a day where I come home early to cook for you?

As busy schedules have become an increasing problem in relationships, HCC student Joanne Johansen found the time to make her marriage a priority. “Every Friday is date night for me and my husband,” Johansen said.

After two years of marriage plus the five years they’ve dated she still finds communication to be the most valued in the relationship. “Don’t assume your partner knows exactly how you are feeling, just be vocal about it,” she said, because problems can’t be solved with silence, it only creates distance.

While couples are also visiting a marriage counselor to help boost their relationships or fix any marital problems, others rely on shared religious practices as the contributing factor for a happy and long-lasting relationship. Christian couples often use the phrase stated in 1 Corinthian 13 that these three remain: faith, hope and love, but the greatest of these is love.

“In January we will have been married 40 years!” April Peterson* from the state of Idaho rejoiced. She credited the length of her marriage to following Bible principles. “We follow its advice on always communicating with each other, showing love, respect and understanding.” Peterson* added, “be kind and forgiving and don’t be too weak to say- I’m sorry.”

The hardest part is getting through the difficult times, but that is the real accomplishment. It may seem frustrating, but knowing that both people made it out of their troubles and still are in love with each other is a clear sign that the relationship is built to last.

Luckily, April and her husband John has 40 years of experienced to tell couples to be realistic because marriage is the union of two imperfect people. She explained that couples should act like best friends who are always there to help each other. She recalls special memories with her husband as the ones they’ve survived and came out stronger with God’s help. “The thought of being without John was not an option,” she said.

“A successful marriage doesn’t just happen, it’s hard work,” said April’s husband, John Peterson.* “It is the result of diligent effort by both husband and wife. Selecting a marriage partner isn’t like picking a new ink cartridge for your printer and when you get it home, if it isn’t the ‘right one’ you just return it.”

To illustrate, Cosmopolitan magazine’s recent advice to readers from their article “The 13 Best Relationship Tips Ever” said that love is learning how to accept differences because “no one is perfect”. Couples are not twins, and even then twins also like different things. So, don’t expect your significant other to like all the same movies, foods or share all the same views that you have. Otherwise that would seem a little weird- as if you’ve created a clone, maybe?

After all, love is defined as having deep affection for another person, you hold them very dear to your heart and you are devoted that person. Love is thinking of your significant other on a daily basis- whether you miss them because they are not around or something reminds you of them. The little things do matter. Calling to let your partner “I love you” or calling on your way home to ask if you should pick up anything at the grocery store. Besides, men score points when they bring home flowers and women score points when they cook dinner or buy sexy lingerie. Be spontaneous and try something new because predictability can be boring and the relationship could fizzle.

To make your relationship last a lifetime, John Peterson* advised couples to “never accept failure as an option. Live with the certainty that your union will be for all eternity. Try every day to add to your mate’s happiness, to make their load lighter not heavier. Focus on their good qualities. Look for things in their personality that you can treasure. Remember and appreciate every sacrifice they have made to put up with you.”

He describes marriage as painting a masterpiece. “It isn’t completed in a day or a week. No single brushstroke makes the painting. It is all of the hundreds or thousands of little strokes painstaking, thoughtfully and lovingly placed on the canvas, day after day, that create something of beauty.”

*April and John’s last name has been changed by their request.