Sometimes students would love to take a class that doesn’t involve paper, notebooks, and even a board. For those students HCC has a modern dance class where students can learn the art of body movement, mixed with music and time.

However, many students don’t know there is such class, so it has trouble staying around.
According to Theater Arts Coordinator Geoffrey Sheehan,  “This semester Professor Sonia Plumb couldn’t instruct the class since it had too few people,” which didn’t let the class run for the semester.

Plumb, who also has her own studio, “Sonia Plumb Dance Company” in Hartford, CT. comes every Monday and Wednesday from Hartford to teach HCC students Modern Dance. Plumb said that the past few semesters have had close to 20 students, but the class needs at least 14 students to be up and running. 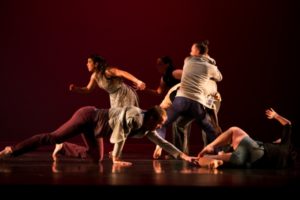 When this class started in 2000, it was made to give theater majors a “movement for the actor” course, said Sheehan, but then they named it “Modern Dance.” Both Professor Sheehan and Plumb have been told a couple times that this class is amazing and very good for the body; and as Professor Plumb said, it’s “getting [students] outside their comfortable zone.”

Plumb explained that the class teaches students “basic technique and creative work, empowering the student to develop physical and creative skills.” It also brings students together when they are working on creative time in class. Students start the class with basics of modern dance, and finish the semester a little more advanced. Some students take the class without any experience in modern dance and they don’t have any problem improving over time. For their final students give a small show at the theater inside the Performing Arts Center in Lafayette Hall.

Marlene Kinchen, a student who  took this class last semester, said, “The class is a great way of getting to be in love with dancing.” She started dancing at the age of 4 and when she got back to dancing classes last fall, she felt relieved.

Modern Dance is the only dance class at Housatonic, but still some students and even Plumb would love it if the school offered a bigger variety.

“It would be great if a couple of other styles of dance were offered to not only build a base, but an on-going appreciation and understanding of dance in its many forms,”  Plumb said.

“I’m still waiting on that second part of the class!,” Kinchen agreed. “The class gave myself and others a great experience.”