A Novel in Four Days

How long does it take to write a novel? Every November people try to write one in a month. It’s called National Novel Writing Month, and the goal is to write 50000 words. It’s a simple idea and daunting at the same time.

There are all sorts of tips and tricks but the mostly boil down to one thing: keep writing. To hit the goal in 30 days you need to write 1600 words each day. Of course you can always cheat a little and miss one day’s worth of writing and make it up another day. Or you can cheat a lot like I have.

This is my fourth year trying to write a novel in a month. The first year was the easiest. I already had an idea I wanted; that’s a second rule.  You have to be writing something fresh not continuing on something you already started. You can plan ahead of course, outlines, random notes, character sheets are all fine just don’t work on a draft before you start the month.

But back to that first year. It was November 2011 and I was a just starting to get back into writing. So I started a novel. It was a weird fantasy taking place in a post-apocalypse world. Going back and looking at it is pretty cringey. There are some good ideas in it but the story feels off and there’s this empty feeling about it. It was also the most I had ever written at the time at 5962 words, a long way from the needed 50000. The next two years were disastrous for one of the novels I only remember the title, Noon, but I have no recollection of what it was about at all.

My third attempt, last year was a little better I at least remember it was another fantasy novel and I actually wrote about 300 words worth of materials 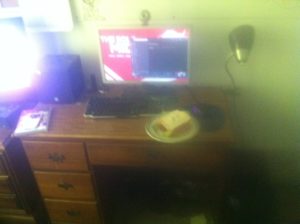 This year is different. I haven’t written a single word. School, work, and life have made it so that by the time I get home I just want to relax and watch cheesy television shows that make me laugh. But at the same time I’ve grown so much as a writer the past several years that I want to try to finish a novel. So I’ve plotted and schemed. I’ve drawn out characters and given them backgrounds. They have stories beyond the one I’m going to write very soon. The world they live on has a history too. I’ve done all this because I’m going to attempt the impossible. I’m going to try to write a novel in not a month but in four days. That’s right.  Thanksgiving weekend, I’m writing 50000 words or as close to it as possible. And it might be impossible and I may burn myself out from writing, but I won’t have regrets because I attempted something that’s a lifelong dream.