By now most students are well aware that HCC has talent. So, it should be no surprise that we have a Music Club right here on campus.

On the afternoon of Thursday November 18, I had the pleasure of attending a Music Club meeting where approximately 10 students gathered to watch the extremely talented guitarist Drew Pinto perform live. 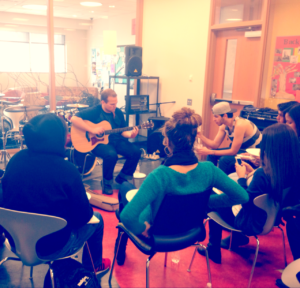 Drew can be viewed on youtube and various other sites, where he is known for his fingerstyle method of playing the guitar.

Students were accommodated with both food and beverages, while we quietly listened to the melodic melodies of Drew’s guitar, which he appropriately named “Taylor”.

Pinto played a plethora of songs.  He stated that most of his “inspiration came from the ocean.”

His songs Soul Stream and Stepping Stones were ultimately two of my personal favorites. Students were really intrigued by how he played and were able to ask questions in between songs, and were also given tips on how to use his methods of playing.

Pinto responded to students by breaking down how he played each chord using musical terminology.  We learned how to prevent a guitar from going out of tune.  He also mentioned how to use “muscle memory” to divide your mind into two places at once, so that you are able to create melodies

Pinto added that his “main musical influence is Antoine Dufour, who is also known for his unique methods of playing a guitar.“ He is also influenced by both classical and the spanish form of playing the guitar.

Students can also like his Facebook page and vote for him for a chance to win a fingerstyle contest where he can have the opportunity of opening for his idol Antoine Dufour.

Martin Jose, The president of the Music Club, invites and welcomes students to come and join the Music Club, which meets every Thursday in Beacon Hall on the third floor, between 2:00-4:00 p.m. weekly.

You never know what will be in store at the Music Club. Who knows?  You may meet a recording artist, for what it’s worth. It will not hurt to stop by.