Mohamed Khatib is a student at HCC in his third semester as a Liberal Arts major. Before he came to Housatonic, Khatib attended the University of Damascus in Syria for two weeks until it closed due to the war that broke out. He stayed there for about one year after the war started before he came to America. 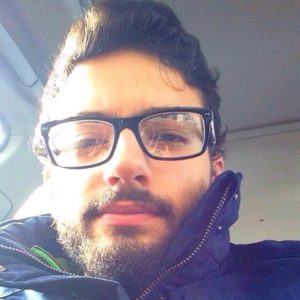 Khatib has a great sense of humor when it comes to talking about his adventures in Syria during the war. Khatib said that one day he went out with a couple of friends to buy some sandwiches, and a bomb was dropped. People started running and screaming for shelter, while Khatib and his friend stood still in their places. A soldier came by, surprised, and asked them, “Why are you standing here?”  They simply said “We are waiting for our sandwiches!” The soldier then told them to move along to a safer place. He then further explained that the bomb remains were found, and it had landed directly on the sidewalk of the street they were on. Khatib said he was not scared at all, with a smirk-like smile on his face.

One day on his way home from school in Syria, Khatib was tired and listening to music with his head leaning against the bus window while looking at tanks and soldiers alongside the road. “I look around and notice that for some reason, everyone is laying on the bus floor with their hands on their heads and their faces didn’t seem happy,” he said. “I took out my headphones and heard gunshots. Ironically, I was listening to a song called Warzone.”

“The sound was horrible, screeching, it was like a whistle,” he added.

There were many inspection/check points for identification throughout the city, and if you didn’t have your ID you would get arrested, “…and God knows what will happen to you. One of my friends was held for about a month, he didn’t know where he was taken to, and when he got out he asked the guard outside ‘Um hey, where am I?’ Despite the jokes his friends made after that, he was brutally beaten and tortured. His father was also taken but instead of a month he was gone for a year and a half without any communication. His family didn’t know whether he was dead or alive,” Khatib recalled.

Through the snipers, missiles, bombs, and tanks, some were lucky to get away, but unfortunately some were not. “Everyone around my friends was dying, but thankfully no one I knew died,” he said.

Education is extremely important in Khatib’s family. His father is a successful engineer and expects his son to go into the medical field. Khatib tried attending college in Syria but stayed home for two weeks after the road to school got crazy, “It was a war zone over there.”

“What happened in Syria doesn’t tell my whole life story,” explained Khatib.“It was probably the craziest thing that ever happened to me.”  It changed his life in many ways. “With the events in Syria happening, I was reunited with an old friend from middle school,” he said.

Khatib said he used to be more of a shy guy, not very outgoing, and stayed home a lot but all that has changed now.

Khatib witnessed many horrific events and watched his beautiful country fall apart, but he was still able to keep a smile on his face and try his best to seek an education even if it meant leaving Syria.