It is not every day that someone can turn on their television and create what they see on the screen. At the age of eight, sophomore Tyrone Falls began drawing his favorite cartoon characters in his sketchbook. This sparked his love for all things art.

Falls purchased a top-of-the-line designer tablet, Wacom Cintig Companion, traditionally used by professional digital artists/animators. He had high hopes that the purchase would be a beneficial investment for his future.

“At first I thought the cost of the tablet was way too pricy, but once one of my favorite animators released a statement on the material he uses, I just had to buy it. It will definitely last me a long time and be the thing I do most of my animations on,” Falls said. 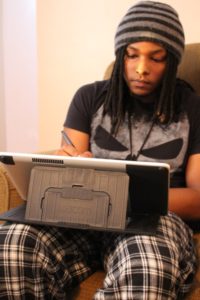 Falls begins to create one of his newest pieces of work in the comforts of his own home. (Photo by Celeste Burnett)

This animator is no stranger to the business and realizes that it is a demanding job. He spends most of his time balancing his work load and his animations after classes. He is currently enrolled in three classes and has declared a major in Graphic Design.

Some of his major inspirations come from 27-year-old Rebecca Sugar, an animator for the hit television show Steven Universe.  Some of her other work can be seen on the television show Adventure Time, both on Cartoon Network.

“The way Rebecca creates her characters is so unique that I have been able to identify whenever or wherever I see her work. It looks amazing and I hope to immolate her originality in my own pieces,” Falls said.

His second inspiration comes from Ian-Jones Quartey, another lead artist who worked alongside Sugar in the production of Steven Universe.

“It is definitely a dream of mine to be able to utilize all of the skills I learn here at Housatonic and incorporate it into my art to make a living doing what I love. My ultimate goal is to see some of my work on television and allow others to view what I can do,” Falls said.

A huge goal of Falls’ is to receive an internship in California where many animators get their big breaks into the animation world. He is on the right track to begin his career and demonstrates a love and natural talent for his interest. Be on the lookout for a Falls original in the future.