No Glove, No Love

Ronnie Dubrowin tore open the packet, slipped her hand into the condom and pulled it up past her forearm. It wasn’t all for laughs, even though that was the audience’s first reaction. The Planned Parenthood clinician was demonstrating just how “small” the free contraceptives were. She’d done the stunt on many occasions when men at the clinic would complain about the size.

On Thursday February 12, Dubrowin spoke to students in room 370 of Beacon Hall as part of the Safe is Sexy event sponsored by the Women’s Center.

“There’s nothing particularly attractive about taking a risk and getting a disease or dying.” Dubrowin said, wiping the oily lubricant off her arm.

Just in time for Valentine’s Day, Dubrowin confronted myths about sexual health head on and challenged her audience to do the same. Condoms, both female and male Dubrowin said have an 83% protection rate. The morning after pill is 95% effective, and if a woman has an abortion at Planned Parenthood whether it’s by pill or surgery it is safe and will not affect their ability to have children in the future. Birth control pills of yesteryear may have made women fat but not anymore. Weight gain is typically a pound or less a year.

With plenty of humor and over twenty five years of midwifery under her belt Dubrowin spoke to a rapt audience of over a dozen male and female students. They were encourage to ask questions and make comments and that is exactly what they did. “Another great question” Dubrowin said frequently before delving into another explanation.

Interspersed with answering questions (“Yes if a woman has a short cycle like twenty-one days she can get pregnant during her period.”) and giving the low down on contraceptives Dubrowin touched on the scary reality that STDs are running rampant again in Connecticut.

People’s worry goes down and they get lax with protection, Dubrowin said. Syphilis, gonorrhea and chlamydia can all be treated and cured at Planned Parenthood but students should be an advocate of their own sexual health and that of their partner’s. 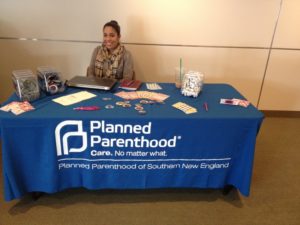 Dubrowin’s myth busting continued with the STD’s. Eight out of ten people have Herpes, and yes it is highly contagious, and yes it never goes away but it should also be noted that a large majority of it is asymptomatic with limited flare ups. Dubrowin said children and virgins often get it from coming in contact with a fever blister or cold sore on a friend or loved one’s mouth during an outbreak, and that is where they have their own outbreaks. Crabs, also known as pubic lice can be transferred through bedsheets or clothing, “Pretty sexy stuff,” Dubrowin said, smiling.

Rosetta Rabb, a human resources major at HCC was vocal for the duration of the talk, “All the questions were there in my head. It was amazing. You gotta hit on the most common questions. To find out things you never really asked about.” Rabb said she was drawn to the event by the signs posted around campus.

Also in the audience was Brandon Ortiz, a member of UNITY club. He summed up the talk as being like Sex-Ed for adults and said he was glad there was such a big turnout, “I think it’s important. . . Some people go their whole life without knowing. People get nervous [and] they want information but they’re scared,” he said.

Outside of room 370 two tables were set up for the afternoon and went along with the program. The GBAPP, also known as the Greater Bridgeport Area Prevention Center, is focused on reducing  teen pregnancy and lowering the spread of HIV. They had a tablet full of pamphlets and were doing free testing for the event.

Directly to the left a Planned Parenthood table was set up. Pens, bright packets of condoms, pamphlets and vials of lubricants splayed out across the table. Jennifer Gaines, a youth development coordinator and educator, was in demand with many women. Plenty of them did not attend the actual talk but approached Gaines, asking about birth control methods and the services Planned Parenthood offered.

Linda Wolfson, Coordinator of the Women’s Center, set up the event and not just because of Valentine’s Day. “It’s back by popular demand,” Wolfson said. Two years ago a similar event ran with Ronnie as guest speaker. Since that time there have been numerous requests from students and women’s center regulars to bring the event back.

If there’s one thing the audience could get out of the talk Dubrowin said it would be, “Safe really is sexy. . . It should respect physical, emotional, and future health. It shouldn’t hurt in any way.”

Planned Parenthood’s Bridgeport office is on 221 State Street. Many services and birth control are free and are explained the website

Future free testing opportunities and contraception events will be advertised around campus.