Worldwide, more than 350 million people of all ages suffer from some form of depression. Approximately two out of three people who commit suicide suffer from major depression. Yet, although it is the most common form of mental illness, society still does not consider depression to be a serious problem. 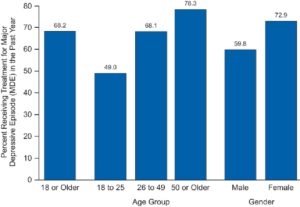 This bar graph on the Center for Disease Control and Prevention website shows the percentage of certain age groups and genders in the United States who are receivng treatment for major depressive episodes, which are a part of the disease.

Common misconceptions regarding depression are hindering society’s understanding of this very serious mental illness. Without that understanding compassion is difficult to find for those with depression.

Many people who do not have depression do not view it as a real clinical illness. As someone who suffers from depression I have had family members and friends tell me to “stop thinking about it,” or  “stop crying, it is not that big of a deal.” Though they mean well, what they say only makes me feel worse.

From the outside looking in depression can be confusing as it can manifest itself in many different forms, but the most common type is Major Depressive Disorder. Symptoms can be hard to recognize.

The most common symptoms are feelings of helplessness, loss of interest in daily activities, appetite loss, and sudden weight changes. Others can include changes in sleep schedule, fits of anger or sudden irritability, fatigue, self-loathing, and reckless behavior. These symptoms may not affect everyone dealing with depression, each case is separate and unique.

One of the more common misconceptions about depression is that it is a sign of mental weakness.

The Huffington Post Stronger Together platform says that this stigma is one of the main reasons why so many people elect to suffer in silence rather than seek the help they need. People who suffer from depression are afraid they will be seen as someone seeking unwarranted attention, perceived as acting sad and needy hoping others will feel bad for them. This is not true. What many people do not realize is that no one chooses to develop depression.

Depression is a complex mental disorder that affects a person biologically, psychologically and socially, it does not discriminate. Someone with depression cannot simply “get over it” as some folks might suggest to them.

In addition to assuming that depression is a sign of mental weakness, another misconception about depression, the most offensive of all, is that “it is not a real illness.” I will never understand why people seem to push depression to the side when so many people suffer from it. Sufferers are not looking for attention or meds, they are looking for help, but many simply do not know how to ask for it. 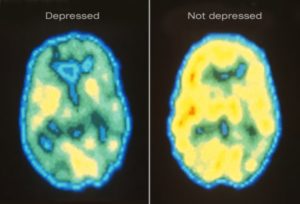 Depression is a serious medical condition with a wide range of consequences for those afflicted with it, and to society as a whole.. According to the Mayo Clinic, people with depression actually have physical differences in their brain, neurotransmitter and hormone imbalances that determine their condition, not to mention its severity.

Dr. Silberkleit uses a Cognitive Behavioral psychological approach, dealing with negative thoughts, attitudes, emotions, behaviors, and works on building motivation. She suggests that those who do not understand depression read articles on the Anxiety and Depression Association of America website, visit WebMD to look up signs of depression, and to just simply listen to those who have depression.

Depression is a very serious illness that affects millions in the U.S. You may know someone who suffers from it. If you think you suffer from depression do not be afraid to reach out to someone you trust, it may seem scary but remember that this is for the sake of your health. Trying to find the right treatment may take some time, but it will be worth it. It’s easy to misunderstand such a complex illness, but that does not mean you shouldn’t at least try, compassion and understanding are just as vital in treating depression as any medication.