Is Enough Being Done to Keep Students Safe?

Cleaning up after a snowstorm is always difficult. It can take quite a bit of time and effort to get roadways and sidewalks cleared of snow and ice. Sometimes this is not complete in time for classes to begin at 8 a.m, yet Housatonic continues to open the campus with no delays. This may not have caused a problem yet, but if it continues, somebody will get hurt. 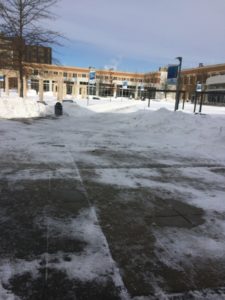 Sidewalks covered in snow following a snowstorm. (Photo by the author)

Over the course of the semester, Housatonic has been closed four times due to snow. A delay has not been utilized for the following day at all. Some of these mornings have been treacherous. Coming to my morning classes on those days was an adventure. My car was sliding and struggling to find traction the entire drive to school. When I got to campus, the parking garage was not any better. The parking garage is almost always filled with snow after snowstorms and it is very dangerous for students walking from their car to the staircases. Once students do get outside, it is just as difficult to get into the building without slipping and falling because the sidewalks were not fully cleaned before students arrived. This is not acceptable and needs to be changed.

However, not all students feel that way. Some are satisfied with what is currently being done. One of these students is Philip Hammond. Hammond does not feel that safety is an issue at the Housatonic campus. He said, “The school usually blocks off areas that are slippery.” Hammond also added that the parking garage is in better shape than most see it. “The garage seems to be well maintained,” he said

When Housatonic does decide to close, it is often difficult to find out about it. Henrique Rivera, a student, said “They [Housatonic] are usually late in letting people know when campus is closed.” The school is notorious for waiting until the last minute to cancel classes. Sometimes they wait too long.

Kahled Boustati was a victim on the first day of classes. “I was already at school when they cancelled class,” Boustati said. This makes for a long and worrisome drive home for students because of how long the school decided to wait before making a decision.

Mohamed Wasfi proposed an idea to help let students know of cancelled classes quicker. “Housatonic needs a better app. The current one goes to the website but it needs to be improved,” Wasfi said. This app can offer push notifications so students will know when classes are cancelled instantly. This would keep students from travelling in dangerous conditions for nothing.

An example of the school not doing enough to keep students safe occurred on March 2. A snowstorm moved in during the late afternoon hours. Housatonic closed at 6:30 p.m. but it was far too late. I had a class at five and the drive home was very dangerous. The roads were completely covered in snow and nobody had any business being outside. The school needs to close before this happens as somebody commuting home could have been seriously injured on the roadways.

Housatonic’s President could not be reached for comment on this story.