The Rhythm in the Rhino: Local Artist Brings New Life to Housatonic With Captivating Exhibit

Our universe seems to be built on the principle of millions of small pieces coming together to form one big product.  Whether it be words coming together to make a paper, atoms constructing matter or a series of seemingly unimportant decisions building on top of each other to create your own life story, nothing seems to simply exist without becoming part of something else.

It is this concept that is so elegantly demonstrated in the most recent exhibit to be brought to Housatonic’s art museum, Rick Shaefer’s “Drawing The Line”.  Utilizing the benefits of drawing with charcoal, Shaefer illustrates why this primitive yet oh so fundamental technique has been praised by many for its raw yet detailed results. 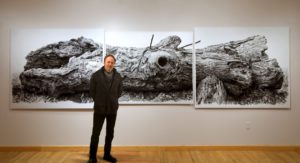 Rick Shaefer next to his creation White Oak, which is on display in the “Drawing The Line” Exhibit.

Focusing on the subject of nature and man’s effect on it, the exhibit is divided into two sections.  One half shows a variety of life sized animals including a monumental Rhino drawing split between three canvases.  The other half focuses on tree life that illustrates the bittersweet beauty of our decaying surroundings.

From a distance these pieces of art awe you with their attention to detail and give off the sense that Shaefer spent a lot of time in nature, up close and personal with his subjects.  You don’t get the full effect of the drawings, however, until you step a bit closer and observe the thousands of individual marks that work together to construct the full image.

At first glance it seems as though these marks are made at random, simply to fill in the gaps, but upon closer inspection it becomes apparent that there is a method to Shaefer’s madness.  While they may look like mere scribbles bending every which way, it is the steady flow and the way they work together to create texture that proves how Shaefer was thinking about the overall image when creating them.

Strangely enough, the artists himself does not know exactly how his creation will look as a whole for the majority of the time he is working on it.  In an email interview with him Shaefer told me,

“I work on a flat table top (a large one of course) and only when it is far along can I then tape it up on the wall and carefully add tone and depth where I feel it is needed. This means that I really don’t know what the drawing will look like standing back (when all the myriad of marks hopefully come together) until late in the game. I’ve gotten used to, and kind of enjoy, that suspense.“

It is perhaps that suspense, that lack of proper context,  that makes it so easy for Shaefer to get lost in developing the tiny details of his work.  As a viewer, we often only see a piece of art as the final product, and sometimes forget that with any form of art, the almost meditative allure for the artist comes from simple joy of being creative in the moment.  Whether it be drawing a face into the bark of a tree or deciding how to texture a sky differently from his other pieces, Shaefer clearly had a lot of fun developing every detail of these works.

And I’m not the only one praising Shaefer’s work.  When I caught him in the exhibit HCC student Steven Contreras told me “The Charcoal is very graphic, it pulls your eye in” and “the shadowing is done very well”  Another student, Brittany Franklin, added “[I like] The different shading, it’s very precise”

To see upcoming exhibits, simply stop by The Burt Chernow Art Gallery in Layfette Hall, right next to the main information desk.