On April 2, Housatonic’s second annual Cafe Night took place in the Beacon Hall Events Center.  Organized by the school’s division of the national Black Student Union, Cafe Night invited students of all races to dine on some delicious food while enjoying beautiful dancing and powerful poetry. The night was a relative success, with over two dozen people joining in the festivities. But while these arts were by far the focal point of the night, the event also carried with it an inspirational message of empowering women of color to overcome any situation life throws at them. 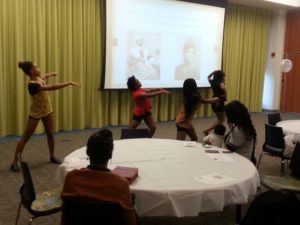 The message was possibly best presented by event speaker Pastor Darlene Mitchell, who provoked the audience to ask themselves “What will be my legacy?” She talked about how women have almost endless examples of other women who have pushed forward through all their hardships to take control of their own lives. Maya Angelou, Beyonce, and the Queen of Sheba were just a few of the people she mentioned. 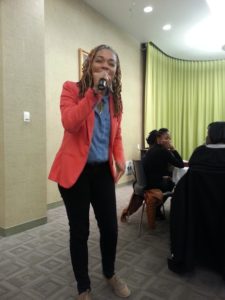 Following the Pastor was the local poet Decipher, who delivered three earth-shaking poems centering around the perceived bitterness of black women and encouraging her peers to read more. Her fellow poet Kamyia McTavish also brought a performance to the stage, presenting his views on why guys have to stop seeing women as objects and instead should think about how they go through their own struggles.

Even though the event clearly focused on black history and culture, BSU President King Broadnax was sure to emphasize that the Black Student Union is not only for black students. In fact, he said after the event,  “Anybody who’s about learning, educating themselves about something they might not be too familiar with is welcome to join the Black Student Union…we think it can help the black student union to bring their mission future if people of different backgrounds, people of different ethnicities were to join the BSU. Maybe they know something that we don’t know, maybe they have a different perspective that can bring it closer to its mission.”

If you would like to get involved in the union’s mission to promote a spirit of unity and mutualism between the school and the community, consider attending a meeting in Lafayette Hall room A215 any Thursday this semester at 12:30 p.m.