Once upon a time you had to wine and dine a woman before getting her out of her clothes. Nowadays, your next 15-minute romance is just a swipe away. Gone are the days of rehearsing in the mirror before you ask someone out. By the looks of it, today’s generation will never understand what it’s like to go on a real date; one that ends with a kiss at the door, instead of a romp in the sack.

It seems like they’ve exchanged the security of a stable, and healthy relationship for that of sloppy drunk sex and a slew of one night stands. Is it something in the water? No. It’s something in society. For decades now, Americans have been desensitized when it comes to sex. It started with the gyrations of Elvis’ hips and moved onto Jersey Shores Snooki flashing her lady bits to everyone on the shore.

Welcome to the hook up culture, where anything goes as long as you can get it in. 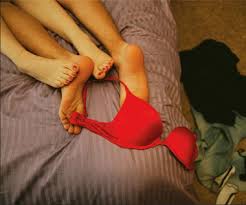 Alli Geiger, 29, of Milford said, “I think society is more into hooking up with the belief that it will lead to a dating relationship because the process of dating has been so diluted. So people just assume if they hook up with someone, eventually they will start dating.”

Whereas in generations passed, “dating” meant being a part of a monogamous relationship, at present, the term is loosely applied to sexual relationships.

As a bouncer at a popular college bar, it’s hard for Jones to believe in love.

“I believe the era of love is dying, personally. Relationships don’t last as long as they did before, there are a few old timers but to find someone to match is impossible. I don’t believe in open relationships. If you’re going to be with someone give them your all, otherwise why do it? Relationships are about growing together and you can’t do that with this whole open idea,” he said.

Jones isn’t the only one who feels this way according to the book, The End of Sex: How Hookup Culture is Leaving a Generation Unhappy, Sexually Unfulfilled, and Confused About Intimacy by author Donna Freitas.

In Freitas’s book, she says, “The more students talk about hooking up, the clearer it becomes that it has less to do with excitement or even attraction than with checking a box off a long list of tasks, like homework or laundry. And while hook up sex is supposed to come with no strings attached, it nonetheless creates an enormous amount of stress and drama among participants. Today’s younger generation learns quickly and learns well that the norm is to be casual about sex — even if many of them don’t fit this ‘norm’.”

So, if the majority of people have a problem with the hook up culture, why aren’t we seeing a change?

For starters,  more and more of the youth are using apps such as Tinder to meet other youthful singles. Tinder is no Match.com. Match seeks to provide one with possible relationship matches, whereas Tinder seeks to provide users with the nearest hook-up.

“I got [oral sex] within 4 hours of downloading the application. If you’re an ok-looking dude who can string a few sentences together, you can easily go on 3-4 dates a week. I had something like 400 matches when I turned it off. It was quite an eye opening experience, I didn’t go absolutely nuts but I slept with two Tinder girls, oral with two others and made out with a couple more,” said JW, age 29, a former HCC student who did not wish for his name be disclosed for fear of upsetting his girlfriend.

There are a lot of people out there who don’t mind using an app to meet people, Jake Healy, 24, a business major at HCC, says dating apps just aren’t for him.

“I have not ever used any dating apps or sites. I think they’re creepy and not really my thing. I’d rather meet a girl in the real world than through my computer or phone. Pretty much all of my friends use Tinder though,” he said.

Technology has certainly made hooking up easier than ever. According to The New York Times, there are an estimated 50 million users swiping left and right on Tinder each month. That means that each month, 50 million people decide who they are going to sleep with based on a photo.

“It probably had a negative impact on it [society],” said 23-year-old ASU student, Angelo D [name has been changed]. “I mean instead of building relationships or something if I wanna get laid I can just go on Tinder.”

With so many people using apps like Tinder to seek out their next sexual conquest, where does that leave the future of relationships?

“My generation is and maybe my sister’s generation is gonna be the last [to have relationships]. Like all my buddies I know who are 19 and 20, all they do is f**k. The general consensus is it’s easier and they have no worries or commitments,” said Angelo.

No one can say definitively when dating and monogamy will make a comeback, but it is safe to assume that it will be after this generation stops looking for the next lay and starts laying a solid foundation for long term relationships.

Would you use or have you ever used an app like Tinder?  Why or why not? Let us know in the comments below.