Written by Niles Wilson
Published on May 2, 2015

When the long haired rapper known only as Dave, creator of BoyInABand.com, posted his music video, “Don’t Stay In School,” he was trying to cause discussion.  What Dave wasn’t prepared for, however, was just how big of a response he would get.  Although not actually encouraging students to drop out, the video raised the issue that some public school systems may not be doing a very good job of preparing students for real life situations such as paying taxes or buying a house, and instead focus on outdated information that may not be relevant to many of the life paths that students choose. 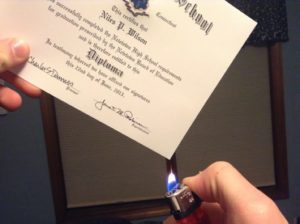 Guess you won’t be needing this anymore.

One month and 1,000,000+ views later, the comments are still pouring in.  Hand in hand with 1,000,000 people comes 1,000,000 opinions. Half its viewers swear that Dave is just a whiny kid who didn’t pay much attention in school, while the other half desperately want the issue to be addressed by their administrations.

These opinions are not contained to the Internet, however, as similar thoughts can be heard in whispers around Housatonic.

Housatonic student John M vented about how that there might have been one class during his senior year where he learned things like how to balance a checkbook.  For anything that he didn’t learn in school, he says he picks up simply by trial and error.

“[There should be a] higher emphasis on trade works like auto shop and woodshop, instead of making the science department bigger,” he said.  “I feel like in a public school you should at least be exposed, because the trade stuff is a dying breed.”

Another HCC student, Keanu Williams, brought up some interesting points.  He said that in high school he had to take many classes, such as computer and art courses, that he’s never going to use.  However, he added, “Since a class might help someone besides me.  I wouldn’t remove classes, but give students more of a choice in the classes they can take.”

Williams also pointed out that while his school may not have done great job preparing him for everyday chores, his parents are there to help him learn those life skills.

But just because parents are there to help guide their children through life’s hurdles, does that mean that the schools should abandon that responsibility completely?

Not according to Psychology Professor Tonya Rondinone, who says,“I am disheartened when college students tell me they know little about voting, political news. . . their human rights, the laws in the United States,” even the ones that directly impact students.

“These are topics that should be introduced at the high school level. We can vote at the age of 18, thus society should have educated voters, ones who understand the political party structure, how to research lobbyists [and so on]. I believe one of the main reasons young people do not vote is they lack knowledge on political events and the impact of the voter,” she added.

One reason that Professor Rondinone gives for this lack of exposure lies in the practice of standardized testing.

“I am against standardized testing as a common practice,” says Rondinone. “It forces educators to teach to a test and encourages a singular style of teaching. . .this type of environment discourages critical analysis. The students are taught to memorize material.”

With “Don’t Stay in School”, Dave has provoked a conversation that, if spread and discussed properly, could have a huge effect on the way school systems are run and how the youth of tomorrow integrate into the real world.

To develop your own opinions about the video, view it below.   Then weigh in in the comments:

How relevant do you think this video really is? What did YOU feel was missing from your own high school experience?