Written by Amanda Wright
Published on May 18, 2015

At least 10 times a year I get a blistering, painful sunburn. 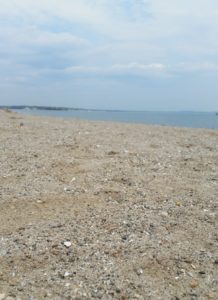 Short Beach in Stratford, CT. Where I receive most of my sunburns.

Sun protection is very important year round, but especially during the seasons of spring and summer because during these seasons the sun’s rays are more harmful, due to the rays hitting Earth at a steeper angle, making them more intense.

I have fair skin so I am more susceptible to the harm caused by the sun’s rays. But, people with darker skin also need to take precautions because the sun’s harmful rays do not only cause sunburns, but they also cause skin cancer.

Being exposed to UV (UltraViolet) rays for long periods raises one’s risk of getting skin cancer.

By wearing sunscreen constantly and reapplying it, one can lower one’s risk of getting skin cancer.

Tanning is very popular, but to stay safe, make sure to wear some sunscreen that has an SPF! (Photo by Amanda Wright)

Dr. Steven Q. Wang, the director of dermatologic surgery and dermatology at Memorial Sloan-Kettering Cancer Center says, “UV radiation reaches the earth in the form of UVB and UVA rays. UVB radiation plays a key role in skin cancer, and SPF refers mainly to the amount of UVB protection a sunscreen offers.”

Cancer.org describes basal and squamous skin cancer as the types of skin cancer that start in the basal cells or squamous cells of the skin, which is how they get their names. These cells are found in the outer layer of the skin.

Most basal and squamous cell cancers develop on the most sun-exposed areas of the skin, like the face, ears, neck, lips, and the backs of the hands.

Basal cell cancers tend to grow slowly and rarely spread to other parts of the body. Squamous cell cancers are more likely to grow into deeper layers of skin and to spread, although this is still not common.

Both basal cell and squamous cell skin cancers can be cured if found and treated early – when they are small and have not spread. But either type can cause problems if it is left untreated.

Cancer.org says, melanoma is a cancer that begins in the melanocytes – the cells that make the brown skin pigment known as melanin, which gives the skin its color. Melanin helps protect the deeper layers of the skin from the harmful effects of the sun.

Melanoma is almost always curable when it’s found in its very early stages. Although melanoma accounts for only a small percentage of skin cancers, it’s much more likely to grow and spread to other parts of the body, where it can be hard to treat. Because of this, melanoma causes most skin cancer deaths, accounting for nearly 10,000 of the more than 13,000 skin cancer deaths each year.

Many people love the spring and summer because they are more tan, but being more tan means that you are damaging your skin. Exposure to ultraviolet rays causes certain skin cells to produce the pigment melanin, which darkens through oxidation.

When playing out in the sun and exposing yourself to its rays, always be cautious of the harm it causes your skin. Make sure to use sunscreen and to try to lessen your exposure.