His hands are steady, his concentration is intense, and there is the ease of youth in each brush stroke. The only indication of discomfort is searching for just the right color for this Norman Rockwellesque backdrop of a white picket fence, green pastures and a barn with a silo.

Hank Frankel smiles at his accomplishments as he replicates a 2015 calendar depicting serene nature scenes. Hank is evasive about his age but indicates a ballpark figure of 80ish. He speaks very little,  as though the intrusions are interrupting his creative flow.

“There are other people in the class that are really good,” Shirley, his lifelong friend, indicates, perhaps to save him from this disruption. 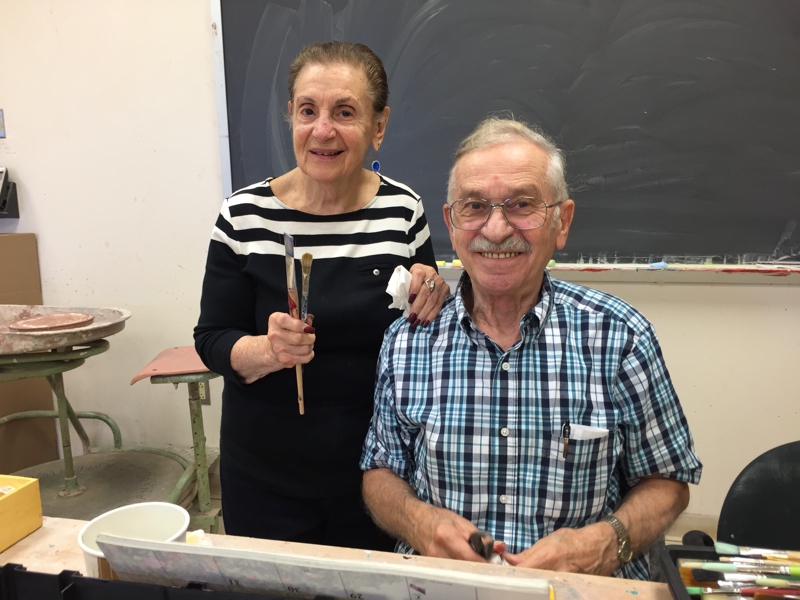 Shirley has known Hank since they were seventeen years old and attended Jewish Mosque together. “I’ve known him and his family for a long time,” Shirley says.

Hank has five children, and there were times when his artistic nature had to take a back seat to the harsh reality of making a living. Supporting five children, this widower took odd jobs delivering the newspaper or working customer service jobs.

It was inevitable that his first love of painting would come full circle, and he would once again have an opportunity to tend to and nourish his first love; painting. With his friend and companion by his side, to fill in the blanks of the past, Hank never abandons his work in progress to expound in any great detail.

Hank is no longer in search of a degree or recognition; it is beyond that for him. Hank looks up for a moment seemingly in deep thought and responds with little effort as though it is all clear to him, why not us “Do what you love to do.” It was just that simple.

Working in an environment with young students and professors half his age, did not seem to sway or discourage Hank. His humble response of “keep practicing” registered as he too was still a work in progress. The moment of reflection ended abruptly with Shirley pointing her paintbrush at Hank, and informing me that he had paintings all over his house.

Hank got back to work, as if he was used to Shirley taking care of everything. In the next moment, Hank looked up and said “You’re never too old,” and with that he picked up his paintbrush and returned to his painting.