In the age of exploration when humble Italian sailor Christopher Columbus stumbled upon America, with his eyes on the prize to trade with India, the klutzy kook ended up in the US of A instead of reaching that land of spices, elephants, and bengal tigers. Some might say it’s glorifying a genocidal figure, while others may call out the bogus claims of Columbus’s being first to discover America; yet, when all’s said and done, this controversial holiday continues to be a mainstay on calendars and observed nationwide.

National Public Radio writes on their website that the hoopla for the ancient explorer started in Colorado in 1906 where a large population of Italian-Americans pushed for a day to be dedicated to the historical figure.

Columbus, a navigator from the Republic of Genoa, became a “central figure” and point of pride to the Italian-American population which was facing unprecedented discrimination from fellow Americans at the time.

NPR writes that it wasn’t until the religious organization, The Knights of Columbus, put pressure on political leaders that Columbus Day became an actual federally recognized holiday during President Franklin Roosevelt’s administration in 1934.

Some of us young twenty-somethings, or other young adult students here at HCC, were probably raised on the splashy Schoolhouse Rock history cartoons that peddled “facts to us.” In hindsight, these song and dance ‘toons are packaged up like some sketchy propaganda. More than a few historical testimonies have revealed that Columbus ain’t no hero, least of all, for being miscredited as the founder of North America.

Dr. Erika Vogel, a History professor at Housatonic, says that Icelandic-born Leif Erikson was technically the first to venture out onto our purple mountains majesty and fruited plains. Erikson and his legion of Viking brethren had long been seafaring people before the Age of Exploration became a breakout hit, kind of like today’s fascination with trashy reality tv series, in the late 1490s.

It’s time to get away from cheering for the blundering, plundering, Genoese crook.

Instead let’s take the day to acknowledge a different sort of historical figure: unarguably one of the champions of modern day cinema, director Christopher “Chris” Columbus. 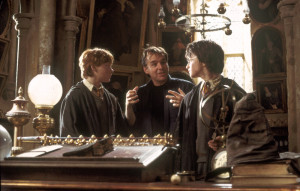 A different sort of Christopher Columbus, making his own magic on the set of “Harry Potter and the Chamber of Secrets.” Image retrieved from the Internet Movie Data Base (IMDB)

The American filmmaker is best known for his contributions to the Harry Potter universe. Columbus’s adaptations of  “The Sorcerer’s Stone” and “The Chamber of Secrets” released in 2001, and 2002, respectively, made the boy-wizard Harry a household name here across the pond.

From his brilliant British casting, to the extraordinary teams of cinematographers and set designers bringing the magic to life, to his close collaborations with author J.K. Rowling, Columbus laid the groundwork for what would become the film legacy of The Boy Who Lived. English Graduate, Katy Rochelle explains in an article she wrote on her Potter Talk blog, that Columbus had some excellent foresight and intuition to what Rowling’s series would become. “The first film depicts [Harry’s] rosy colored transition from the muggle to wizarding world. Then, as his quest progressively grows darker so does the film’s aesthetic. . .  This style endures throughout the rest of the series growing stronger, more obvious, and creating that memorably gritty ambiance.”

Rochelle also reveals in her article that while the long-told tale that the screenwriter, Steven Kloves, and the producer, David Heyman, ran into a young Daniel Radcliffe at the theatre with his parents and convinced them to let their son play the part of Harry is true, what’s also true is Columbus had already put his two-cents in long before. It was right after Columbus saw Radcliffe in the 1999 BBC miniseries adaptation of “David Copperfield” in the title role that he was smitten with the boy’s performance and early acting prowess. It was the chance encounter at the theatre with Heyman, Kloves and the Radcliffe family that really sealed the deal.

Since his time directing the Potter films, Columbus has also proved himself a dab hand at the adaptations of queer musicals (“Rent”), Greek mythology (“Percy Jackson and the Lightning Thief”) and vintage video games with a comedic all star cast (“Pixels”).

Whether you’re a Potterhead, or just someone who gives more than a little consideration to being a decent human being, let’s take this Columbus day to celebrate a man who made his name by sharing his scenes of Christmas escapades, desperate drag-queen stepfathers’, and wand waving, spell chanting, enchantment casting tween wizards on big screens far and wide.

Top up your mug of butterbeer, load up the pumpkin pasties, and give a toast to the Columbus who makes this all possible. Cheers!