The Revolution Will Be Staged

“I want what we are doing to be a catalyst for change,” explains Jeorge Watson. co-founder of The Black Revolutionary Theater Workshop.  He then turns to his female friend and asks if she is okay with him continuing the interview. 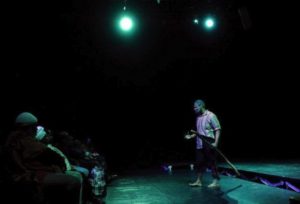 The Revolution will be staged. House lights down, spot light up, ReBirth in Action. Photo courtesy of Tenisi Davis.

“I want people to look at the situation differently,” Watson adds, then quotes James Baldwin, “To be a Negro in this country and to be relatively conscious is to be in rage almost all of the time.”

“Race is a hot-button topic,” says HCC’s African American History Professor, Edwena S. Chance. “We see the world not as it is, but as who we are.”

“We need an expanded discussion an examination through art. InterACTion was created to get people doing something about it, not just talking about it, we all talk about it but do we write about it? Do we make visual art about it? Do we ask questions about it? Rather than respond to news reports and “tisk-tisk,” what a shame, then forget about it… I’m tired of forgetting about it.” says Professor Geoff Sheehan, Coordinator of the Theatre Arts program at Housatonic.

Sheehan is no longer just talking about it; he is taking ACTion. He created an artistic, and culturally diverse fusion of academic departments, programs, and courses at the HCC campus, as well as at the Greater Bridgeport HCC Service Region, to discuss the critical issue of “Race in America.”  InterACTion, a multi-activity symposium on Race and America will take place at Housatonic Community College on Tuesday, Oct. 20, Thurs. Oct. 22, and Friday, Oct. 23.

The theater pieces being performed will be presented by Bridgeport-based ReBirth Arts Collective, founded by former HCC student Tenisi Davis, and by the Black Revolutionary Theatre Workshop of New York City, co-founded by Watson and former HCC student Kevin Green and Heather Harvey, along with their theatre associates from New York.

The Black Revolutionary Theater Workshop is an infant in its creation. While the company is only four months old, their premiere promises to spark gut responses and encourage a deep and profound look at a new Revolution.

“As an artist I would like to use my craft to create an intelligent and meaningful depiction of what it means to be Black in America, at the very least,” Watson says.

The B.R.T.W. was formed on the heels of the massacre at Emanuel AME Church in Charleston. Green, Watson, and Harvey gathered in New York’s downtown SoHo area with a group of outraged citizens to address the atrocity at the AME church.

“We left early because it was not an accurate representation of our community,” says Harvey.

Harvey and her friends began to focus on a creative movement, which would give them the opportunity to articulate and authenticate depictions within their community.

“I’d like to open up a larger dialogue, with questions and answers, we really want to have a discussion,” says Davis. This incident ignited a movement, to create a theater company that would allow African American voices to be heard.

“Anytime you can get students to get involved in something on campus it enriches their experience not just in the classroom, but in the college,” says Karyn Smith, an English Professor at HCC.

Chance and Smith will use this venue to further educate students about literature and race through  poetry readings, and recitals from African American authors, with a focus on how race is represented in contemporary American Literature.

“I think it is a good opportunity to get them to think about the class in ways that isn’t just about memorizing, taking tests and passing classes,” Smith adds.

“We want to raise cultural and social awareness through the arts, entertain and educate communities on historical and current events,” says Davis, who will be presenting a play called “What’s Good” at the two-day event.

Smith adds that,“Research shows that reading literature helps us develop empathy for people. Reading about other experiences outside of oneself in important to understanding other cultures, I don’t know everything, and I’ve never lived that experience, so it’s not something I feel that I can speak too, but how do I get students to speak to that experience? That’s something I’m still working on as a teacher.”

This event will have an abundance of new voices, and an awakening of the ancestors to articulate an age-old, yet, upgraded, view of Race in America. Take a look at the new Revolution.

For more details about InterACTion, read the press release here.