50 Years and Counting: A Look into the HCC Museum of Art

The Housatonic Museum of Art is turning 50 and recently celebrated by offering viewers a glimpse into the works of this new collection. While some see it as a typical art gallery on a college campus, it’s actually an established cornerstone in the college and community, a showcase of talent, history, and creativity. From ancient artifacts to contemporary photography, this collection was a testament to how far the museum has come and their bright future.

With over 5000 works in the gallery, the spectators had their pick of each of the creative pieces that have been hand picked from fifty years worth of previously collected works in their archive.  The exhibit ran through October 16.

Robbin Zella, Director of the Housatonic Museum of Art for the last 17 years, stated, “The exhibit is culled from our permanent collection and so that means it was a curated show.”

Zella walked around the gallery to talk more about the collection. She noted that Burt Chernow, the namesake of the great gallery at Housatonic, was adamant about getting the best and most artistic pieces that he could get his hands on for the school. 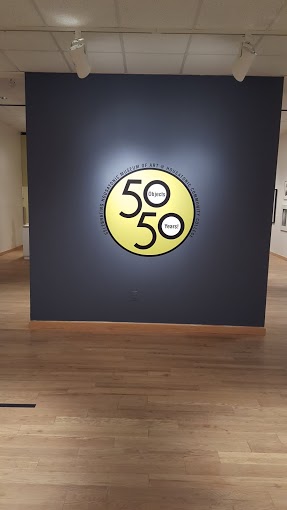 As stated on the HCC Museum of Art website, “Burt Chernow founded the collection in 1967, envisioning an environment that was enhanced and enriched by original works of art, art that could transform not only a room or a building but also individual lives.”

The pieces selected showcase a diverse spectrum of themes and origin, ranging from ancient sculptures created in Asia and oil paintings from centuries ago, to contemporary photographs and pop art captured not even a few decades ago.

The featured artists range from Andy Warhol and Yoko Ono, to Picasso and Hale Woodruff. Every single aspect of the gallery, including when you first walk in, was planned and placed strategically by Zella, which gives the effect of making the works of art pop more.

Anne Chernow, the wife of the late Burt Chernow, having attended the opening, thought Zella had done a “beyond first-class job” as far as the collection selection. Chernow explained, “every piece [displayed] is a gem,” and 50 Years And Counting is a,“remarkable exhibition that was beautifully hung.”

Another instrumental person in the unveiling of this timeless exhibition is Courtney Linderman, HCC’s Museum Collection Manager. She gave her unique perspective about this specific collection. One thing that really stands out in the exhibit is the sensitivity and delicacy of these pieces, some of them only a mere 20 years old while others are centuries old.

But Linderman wasn’t worried about the timeless pieces being on display. “Since the items are on display for only a short time, they can withstand the temperature fluctuation, light levels and unexpected human interactions,” she said.

Linderman also mentions the importance of the outreach and gratitude the gallery receives from the campus community. “I feel the most proud working for the Housatonic Museum of Art when the community here at the college reach out to us and say how excited or appreciative they are of the quality of the artwork we display throughout the campus.”

Going into this collection blind as to what kind of work would be displayed, it came as a great surprise and excitement to me to see such diversity in the collection of past works. One of these works included “Wrapped Modern Art Book” finished in 1978 by the artist Christo. The piece is simply a book wrapped in plastic and tied with twine and it’s meant to show how even the simplest of objects can suddenly be turned into a mystery with just the right amount of secrecy.

Fans of the pop art that came to rise in the sixties had a chance to see the work of Andy Warhol and his “Flowers” piece, completed in 1964. A display of vibrant colors and patterns, this piece transitions into another piece that has a similar theme of rock music in the 1960s.

The collection also displayed more “not suitable for work” pieces for mature audiences. One of those pieces is “The Four Witches”, created in 1497 by Albrecht Dürer. It is a detailed pencil drawing of four naked women conversing with one another.

Another one is called “Reclining Nude,” finished circa 1912 by Gustav Klimt. This piece is more suggestive as the woman simply drawn on the cream paper is fully exposed with the bare lower half of her body clearly visible. These pieces work well together, especially in the age of femininity and women claiming the sexuality and bodies.

Zella says that she hopes the collection could give students, faculty, and the general public a chance to “dip their toe into art.”

If that is the case, then the students had an ocean of work to dive into. Steven Eszenyi, a student at Housatonic, thought the collection was brilliantly done.

“It is a great way to celebrate Housatonic’s 50-year anniversary with 50 of the pieces that the school has acquired over the last 50 years,” he said.

The thing that set it apart from other exhibits is this is one that captures centuries of work, spanning genres and continents, while all being brilliantly tied together by universal themes and creativity, which is the beauty of art.

To see upcoming exhibits, visit the Burt Chernow Museum of Art, located in the lobby of the Lafayette building across from the service desk. The gallery is open Mondays through Fridays from 8:30a.m.-5:30p.m. and is open until 7p.m. on Thursdays.