I’m sitting in B-120, the tutoring center in Lafayette Hall. I have an exam in my math class in two days, and my comprehension of some of the material that will appear on it is weak and worrisome. I’ve come here to seek the aid of a tutor, but I quickly come to realize that getting some extra help won’t be as easy as I had planned. There are two tutors working right now, and they are both busy with multiple students. This creates a chaotic energy that is almost directly in contrast to the writing center right next door, where I work. I have the privilege of sitting down with one student at a time, which makes for a more relaxed and focused experience. Though I do eventually get the help I need, my mental comparison of the two connected, but different rooms of the Academic Support Center highlights how our state’s political decisions have manifested. 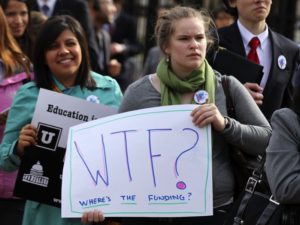 The bigwigs at our state capitol have impacted both my life and yours, and they don’t even typically set foot on campus. This academic year, HCC has lost a total of $1.4 million in funding, a financial injury that has subsequently harmed our operation in numerous ways.

Marianne Tecun is director of the Academic Support Center, and she oversees all of the ASC’s tutoring services. As someone who deals directly with budget issues, she says candidly,“My student labor budget was cut by 29%, and we were given absolutely no money for professional tutors when the budget was first released. We were open 46 hours a week for a number of years, and at the beginning of this academic year, I chose to reduce to 36 hours.”

Such a large reduction meant that Tecun could not fund tutoring for many courses, including ESL, CSA, and accounting, and that tutoring for math and English would be more limited.

“The president named the ASC in his opening remarks at student orientation, and said that it was key to student success and retention,” Tecun says. “But with the budget unresolved, I felt like I was sitting in contradiction.”

She encouraged students who felt they were affected by the decreased tutoring services to write letters to our president, Dr. Paul Broadie.  She said this effort partially restored the ASC’s funding, and Tecun was able to hire more tutors and bump the center’s operating hours back up to 41. 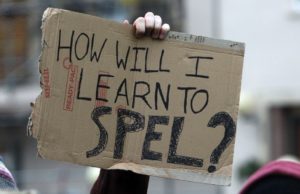 A sign a protester created for an occupation at England’s Bristol University in response to budget cuts and proposed tuition increases.
Photo by Matt Cardy for Getty Images. Image obtained through Britannica ImageQuest.

Despite the difficulties, Tecun still feels the department is supported by the college, and she noted the rise of professors working as volunteer tutors in response to the cut.

In general, President Broadie said that he had to think of “creative” ways to meet the cut, and that he “made cuts strategically so they’d avoid impacting services to students.”

“Our operating expenses were cut five percent,” Broadie says. That umbrella term includes products like paper, pens, pencils and other supplies, and actions like turning off every other bank of lights during the summer.

In addition, Broadie explains, “We cut our Sunday operations. We had only offered three classes, but the expense was huge.” Broadie says the decision was made because the students who took Sunday classes last semester were able to register for the courses they needed on other days of the week this fall. He also promised to re-visit Sunday classes in the future “in a deliberate way,” after student interest is gauged.

Broadie said he made preserving faculty and staff positions a top priority, since they are “the heart of the college,” but educators don’t come cheap.

“Labor costs have gone up, raises are required because of contracts and unions; all of this means less money,” he says.

Tecun shared that the ASC once had an assistant director who, while not eliminated as a result of budget cuts, got shifted to a faculty position. The vacancy still remains although she fortunately has help from English professor Karyn Smith, who coordinates the Writing Across the Curriculum Center, and Aliss Obeid, the part-time tutoring coordinator.

“The vacancy factor is a part of our personnel costs. Holding on to vacant positions eats into operating expenses,” says William Brown, Dean of Academic Affairs.

Brown also pointed out another reason why Connecticut has less to give to the college: “The state is decreasing in population, and that means less funding for everybody,” he says.

Earl Graham, HCC’s Director of Admissions, was not as impacted by budgetary issues as others. “Admissions does not hand out any money, and we have a small budget to begin with,” he says. “But we’ve always been able to stem the tide and continue momentum. The only real impact may be that the scholarship office has less to give to students coming in.”

Graham also shared that HCC was the only one of the state’s 12 community colleges to experience an enrollment increase this semester: 1.5% compared to last fall.

Denise Bukovan is the Dean of Outreach here at HCC. When weighing in on the situation, she shared some startling information.

“Over the long term, budget cuts result in a gradual erosion of the funding base of the college. There ends up not being enough funding to provide the courses and services that students need,” says Bukovan, “There’s [five] counselors for 6,000 students – that’s tragic.”

Though Bukovan noted that HCC has done “marvelously well despite setbacks,” she explained the “whittling away” that she has observed over the three years she has worked at the college.

“They’ll cut a few sections of courses, and they’ll make other sections bigger. Part time staff get eliminated because they’re on contracts and have little in the way of rights,” she explains.

But one particular fact Bukovan shared stands out above the rest.

“85% of the budget is spent on personnel – salary, fringe benefits. Cuts normally go to the bit of discretionary money left over,” she says. “What happens is you don’t buy some of the things you need, or do repairs you need to do – it’s what’s called ‘deferred maintenance.’”

Bukovan also spoke about how the college’s funding is “per student based.” In other words, for every student, there’s a certain amount of state funding, and with higher enrollment comes more money. This insight connected back to what Graham had shared with me about our enrollment increase.

“The whole college worked very hard to identify students, bring them in, and get them to the right place at the right time,” Graham says.

Though budget cuts are a fact of life at public institutions of higher education, Broadie noted the importance of finding funding beyond student tuition and state allocations.

“We need to focus more heavily on raising funds from outside dollars – asking for private donations, increasing our grant applications. The more we do that, the less we’ll be impacted by budget cuts,” he said.

Brown offered a different perspective, arguing against idle ignorance and urging students to speak out, “It’s important for students to be aware and informed, and to know how things work,” he said. “Activism and advocacy are very healthy things for students to engage in. When students understand problems, they come up with good solutions.”