Whether your interests pertain to superheroes, zombies, or you just keep up with what’s popular in the cinema and television scene nowadays, this fall season is the chance to catch some seriously spooky as well as returning and beloved entertainment.

With all of the hype and attention circulating around the second week of October, it is no surprise that New York Comic Con took the world by storm. Star Wars is soon to be released, new television series are popping up and returning; October is an exciting month for cinema and TV lovers around the nation. Celebrities and actors from hit television shows and movies like “Breaking Bad”, “Lord of the Rings”, “Game of Thrones”, and many, many, more were taking over Javits Center on West 34th Street in New York City.

Brien McDonald, a Connecticut resident as well as Director of Publisher and Studio Relations, deals with all things television and movies, as well as engineering the three different stages at New York Comic Con. McDonald currently works for ReedPop, the company that produces and manages NYCC. As far as any tips regarding NYCC for next year’s repeating attendees as well as first-timers, “Get your tickets on the first day,” McDonald said. “A lot of people who really want to go usually don’t get the chance.” Judging by the turn out of NYCC this year, McDonald’s advice comes as no surprise.

Despite all of the extensive promotion going on with television series and movie premieres, McDonald revealed his number-one moment this year was working on a panel with Late Night host Seth Meyers. “It may not be Marvel or ‘The Walking Dead’ related,” the Reedpop team member said, “but it was informative and my favorite part of Comic Con this year.”

McDonald is also the Show Manager for BookCon, an event similar to that of Comic Con, where books and favorite stories are celebrated and admired. He spent his time over the years working his way up to the position he currently holds at ReedPop. McDonald is passionate about what he does and he encourages all those who wish to get into this busines by saying, “You have a problem when you feel bored or don’t like your job. Once you find something you really love doing, it doesn’t feel like work anymore.”

Thousands of enthusiastic fans produced and wore their best “cosplays” or “costume plays” to this event. Admirers dressed up in a nine-foot Iron Man suit, anime characters as well as superheroes, and television series frontrunners like Walter White and Jon Snow and attended this three day long event for the chance to be a part of this occasion dedicated to the best of television and film. 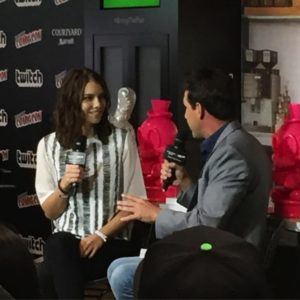 Former HCC Student and Comic Con attendee Alie Liscio snapped a picture of “The Walking Dead’s” Lauren Cohan on the last day of the event.

Alie Liscio, former HCC student and Derby resident, attended this year’s NYCC and shared her favorite moments. “The cosplays were the best,” Liscio said. “People from all other the country, and probably the world, come together for this event, so there were some amazing costumes.” Liscio snapped pictures of “The Walking Dead” cast member Lauren Cohan as well as the Jurassic Park entrance, including a superfan in a realistic raptor costumes that impressed crowds of people. “I bought tickets for Saturday and Sunday. It was a little too much,” Liscio laughed. “I felt like I was dead by the end of it all.”

Speaking of all things “dead”, a big highlight of October that has been driving TV super fans crazy (and impatient) for a rough six months was the premiere of the sixth season of “The Walking Dead”, which aired Sunday, October 11th on AMC. According to Entertainment Weekly, the premiere of this action packed drama triumphed over Sunday Night Football with over 15 million viewers.

Zombies aren’t the only creepy craze this October. If you missed out on this year’s Comic Con or you want something that won’t fail to provide that creepy crawly feeling, “American Horror Story: Hotel” weighed in with a whopping 9 million viewers October 7th on FX. The horror/drama is known for being sinister and terrifying, so it is really no surprise that a horrifying premiere was delivered. This is the fifth season of the chilling “American Horror Story” series, and it pleased viewers with especially eerie performances from Lady Gaga, who made her debut on the show, along with returning actresses Kathy Bates, and Sarah Paulson.

More fall amusement to look forward to: the upcoming and sixth sequel to the ghostly “Paranormal Activity” series, “Paranormal Activity: The Ghost Dimension.” “Goosebumps” is a less frightening, weird, and nostalgic family film that brings some treasured children’s books to life. Although many super-fans could write an essay on “Star Wars” alone, “Star Wars: Episode VII – The Force Awakens,” may not be classified a “fall” film, considering the release date is Christmas, but nevertheless the next installment of sci-fi classic has already brought a gigantic audience of new and old admirers.

These “fall favorites” have given an abundance of joy and amusement to many comic book, superhero, and horror lovers. Returning series and upcoming films are hoping to be crowd pleasers, and as far as Comic Con, the major event is sure to be just as action packed and exhausting in 2016; just remember to get your tickets early!