They’re Black, and Better Than Ever!

This season’s fall television lineup is packed with juicy dramas, gut busting comedies, and compelling stories. But who is dominating the small screen with big roles? Black women. Forget about the nannies and the assistants you used to see them play. Now they are center stage, portraying powerful positions while staying stylish. A wider spectrum of representation for black women is finally here, and audiences and critics alike are loving every minute of it.

When a black woman first stepped foot onto the small screen in the early 1930s she was either a maid, a cook, or a nanny. These “mammy” roles shoved her into an inferior category, as someone who is only there to assist with no input towards the show’s dynamics.

Then the 60s and 70s came along, introducing the “Jezebel”: the bad girl who sexually mesmerizes and lures men to her, according to the late Marilyn Yarbrough, a scholar and editor for racial discrimination.

And what about today? There’s an abundance of greedy girls on the screen, mostly in reality TV, who verbally and physically attack each other in hopes of snatching a man.

These types of women contribute to the misrepresentation and, more largely, a misunderstanding of the rest of us. It’s 2015, and people are still surprised when we don’t lash out at unpleasant situations or when we don’t “sound white.”

But some may think, “What transition? There are still plenty of ratchet, money hungry girls on the tube.” And there are; with shows like Bad Girls Club, Real Housewives of (Insert City Here), and Basketball Wives, it seems impossible to think the black woman has escaped previous stereotypes.

In FOX’s Empire, Oscar and Emmy Nominee Taraji P. Henson takes center stage as Cookie Lyon. Her attitude demands respect — and she’ll let anyone know not to cross the line using clever business schemes or her fists, if needed. This combined with her consistent cursing and loudmouth creates the perfect cocktail for the Angry Black Woman trope. It makes people wonder why Cookie would be so different from the others.

Well naysayers, you aren’t taking a good, hard, look at this woman. She is business savvy and in the midst of regaining control of the music company she started after serving nearly two decades in prison. She does everything for her three sons, whom she has a fierce loyalty to. Cookie chooses a goal, sets her mind to it, and sees to it that everything is complete.

These factors break down the barriers of the stereotype. They contribute to the image millions of women have tried to show America for years. A woman like this is just what we need on TV, so what if she isn’t cookie-cut? (No pun intended.)

The ABC network offers one of the most binge-watched series today: Scandal.

Scandal stars Kerry Washington as Olivia Pope, a former White House communications director turned crisis manager of her own firm. Surprisingly, (or not) Washington is the first black female lead on network television since 1974. “[Olivia] is someone who happened to be born female and black and those elements add to who she is as a human being,” Washington noted in a CNN interview. 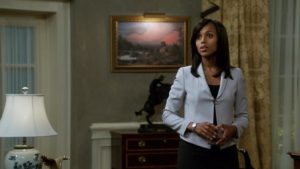 Kerry Washington portrays Olivia Pope, aka “The Fixer” for a fifth season. (Courtesy of ABC.com)

And what kind of human is Ms. Pope? She is a clever, out-of-the-box thinker who understands the importance of prioritizing tasks in a timely manner. Olivia Pope, leader of the Gladiators (her firm’s employees), has several sides to her. While she is mostly direct and assertive, there are times when her vulnerability reveals itself, reminding viewers she is still a person whose feelings confuse her occasionally. She also has a sarcastic sense of humor, which pokes its head out every episode or so.

Olivia Pope serves as a well deserved wakeup call for America: there are educated, polished, black women who get things done without causing a scene.

Sky high ratings, viewers, nominations, and awards validate these actresses’ efforts. A  noticeable flood of praise and honors proves just about everyone is loving the change in portrayals.

The last week of September brought back our favorite shows along with a broken record or two. Empire’s Season 2 premiere scored a total of 22.5 million viewers after three days (including Nielsen’s Live +3 data from Video On Demand, FOX and Hulu streaming).

With eight award wins including the Television Critics Association and Critics Choice Television, and over two dozen nominations, Empire continues to climb towards the top. Scandal’s fifth season premiere was the night’s top rated and most watched show according to Fast National Ratings Update. It earned 10.18 million viewers. Scandal also won the Primetime Emmy Award two consecutive years among the 24 wins and 35 nominations under its belt.

The black woman looks different on screen today. Thanks to exceptional representations like Cookie and Olivia, we’re breaking out of the mold and creating new identities. This just leads to one question: who will the next model be?