A spur of the moment decision made by Joseph Beres, 25, an English major at Housatonic, created an eye-opening trip cross country. After a friend mentioned needing a companion for a journey to California, Beres jumped at the opportunity for an escape from his everyday routine.

Two years ago, Beres decided it was time for a change and got behind the wheel with a close friend to explore the West Coast. Beres’ only vacation had been a family trip to Florida when he was younger, so his love for music and strong desire to see the world is what encouraged him to hop on board with this road trip.

“I’ve always been playing music and wanted to go on tour so I felt like this was the closest I would get to achieving that,” Beres said. With $500 in his pocket, the only plans these two had made were to find good music and take it whatever surroundings they could.

Beres’ best friend Daniel Taverner, 22, an aspiring writer, has plans to attend school in California,  so he asked Beres to accompany him on his road trip. “We were like a modern day Lewis and Clark,” Taverner laughed.

By the time this week long expedition came to the end, these two created an even tighter-knit friendship than before.

“Joe was the best navigator a guy could ask for; embarking on a journey like that is a testament to his adventurous spirit,” Taverner said. “Driving across the United States – I learned we all have a lot more in common than we like to admit, and I got to experience it all with my right hand man.”

It was a winding and tiresome drive from Connecticut to California in a beat-up, standard car with broken air conditioning. Long stretches of land with nothing occupying them made up most of the ride. Occasional stops for coffee at hole in the wall gas stations were small highlights of the drive.

“The cashiers had to brew a whole new pot just for us because they had no customers for hours,” Beres laughed. “It’s little things like that I took away from that trip.” 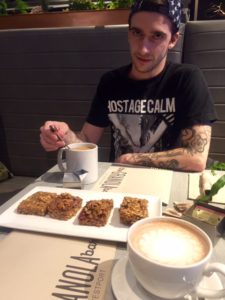 Joe Beres doesn’t only drink coffee on road trips, but also at his current workplace, The Granola Bar in Westport, Connecticut. (Photo by Leslie Pizzagall)i

Several different states, concerts, and endeavors later, Beres discovered the life he lives in Connecticut may be hectic, but he appreciates every aspect of it. From slinging around gallons of water to avoid dehydrated at the arches in Utah, to waiting an hour and a half for a fifteen minute drive in Los Angeles traffic, Joe Beres realized his hometown was something to be thankful for.

“The Rockies were the best part of the whole trip. I can’t really describe how that looked – you’re just in the middle of mountains and cabins, the sky looked different. There was a rainbow over the mountains and seeing the sunset while I was driving was unbelievable,” he said. That hike was just one of Beres’ best memories.

Beres walked away from this road trip with a new perspective: “I came back to New Haven and I was so happy to see all my friends.”

The constant activity in Connecticut was something that grew old to Beres, but being exposed to unfamiliar terrain and lifestyle was the just what he needed to learn a valuable lesson.

“It showed me another side,” Beres said. “Coming back was almost weird – compared to over there, it seemed like there was so much to do. I’d feel like I’d rather be traveling because I want to be touring and playing in a band, but it felt really good to be back.