As reigning recycling queen in my family, an organic foods fanatic and a cat-obsessed animal rights activist, I know that I’ve nailed a lot of the bases on the hippie drop down checklist. I own up to the name with pride. Of all the stereotypes I happily own up to, from granola-munching, to compost advocating, to my ‘Liberal Lizzy’ tendencies, there was always one place I never wanted to go. 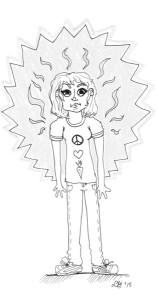 It all goes back to my junior year in high school, there was a dude in several of my classes named Kurt.  He was the poster boy for the hippie I didn’t want to be. Ever.

With his scraggly shoulder length hair, lank and greasy because he refused to use conventional shampoo, and his black studded wristbands, band tees, and fondness for the color black, he was certainly striking. But even more so was the stink that came out of him.

That pungent BO, easily described as a “hot onion sandwich,” was his personal brand of human fragrance. A lot of the classmates would circle out from around him, trying to sit as far away from him as possible and yet still actually have a seat in the class.

More than once, I was stuck in the Kurt stink zone. He reeked so much it made my stomach churn, and it made me want to go straight home and dive into the shower and lather myself into a sudsy oblivion of soap.

So why, why did I decided to finally take the plunge, a plunge that could make me just as putrid, just as foul smelling as the hippies before me?

Because I wanted that toxic junk that I’d been so thoughtlessly putting on, out of my system.

I’d long heard horror stories about aluminum in antiperspirant deodorants and what problems it can cause to the body when absorbed, how by blocking the crucial process of sweating, it can seriously screw up the biology of your body and bring about some really dangerous and sketchy health problems.

The Environmental Working Group classifies aluminum as a “known human nervous system toxicant” but aluminum isn’t the only problem ingredient by far. Antiperspirants also have parabens, which are pesky additives that can funk up the body.

Reports from the nonprofit environmental organization, The David Suzuki Foundation, reveals that studies have shown these preservatives could “interfere with hormone function” and may even be linked to cancer.

As someone who is an environmentally conscious person and who is mindful about the toxins around me — what started as exclusively my vegan diet perspective where I eat whole and unprocessed foods, some time after those concerns shifted to also include my makeup and cosmetics routine. I’d started deliberately seeking out products that weren’t made of ingredients that could be harmful or detrimental to my skin or body.

I wouldn’t want to be slathering some chemical gunk on my face and bringing those creepy ingredients up all close and personal. Skin is the body’s largest organ, as the American Academy of Dermatology reports, and whatever we put on it can and is absorbed.

So what the heck was I still doing putting on antiperspirant when it was clearly an antichrist of the personal care products?!

It was with that epiphany, during the summer of 2014 that I hurled my heavy duty anti perspirant stick of Ban into the recycle bin, and shot off to my local Whole Foods. Tentatively, I wandered into the personal grooming and beauty aisle, a spotless, bright, and immaculately designed area where I oogled at the shelves of deodorants that looked like they were all vying to win the crown in some weird inanimate object beauty pageant.

I settled on an Aubrey Organics liquid roll on. There were pretty music notes printed up and down the bottle and it had a nice woodsy sort of smell to it.

Less than two hours after I put it on, I got a whiff of well…. stank. I couldn’t believe it. As someone who has always been conscious and aware of my own…uh human scents… I was devastated. I wasn’t going to go one more day smelling like well… it sure wasn’t teen spirit. Even though vegans supposedly have less natural body odor than our fellow meat eating counterparts, I know for certain I’m not exactly fragrantly fresh,  especially when I’m running cross-campus or sweltering in the desert heat of a New England summer.

It’s been through much trial and error that I’ve finally found some solutions to banish the stink. I’ve subjected my pits to what feels like dozens of different deodorants and faced all kinds of side effects, from angry red rashes burning up on my skin, to goopy residue staining my clothing, to a combination of them, plus my new signature scent– eau de eco hippie chick, or dumpster chic, wafting all around me.

Why are these deodorants so sucky? Or expensive? Aluminum is so not cool for ANY bod! So why is it so hard to avoid?

Some of the problem stems from regulations. The EWG’s ‘Skin Deep’ cosmetics database reports that the FDA, or Food and Drugs Administration, “has no authority to require companies to test cosmetics products for safety” As if that isn’t freaky enough, in Europe over 1,000 ingredients have legally been banned from cosmetics! What gives, US of A?

It was somewhere I never thought I’d go, abstaining from antiperspirants. But I’m sticking to my values. Even if that means shelling out some more big bucks for different scents of Nourish Organics or Lavanila deodorants when my skin gets too used to the power of them, and I end up smelling like vanilla a la armpit.

Sure, he’s a charming smooth-talker, and even cute, but I’m not eager to emulate Warner Bros’ malodorous casanova, Pepe Le Peu. This gal wants to get on loving the environment, caring for her bod au natural and hopefully, without stinking everyone out around her.