The Black Friday deals that spill into Thanksgiving evening is a dark trend indeed. There was much outrage last November when big box stores and other retailers opened their doors to the masses for their much-hyped annual bargain bonanzas. In a recent Connecticut Post article published last Thursday reporter Dirk Perrefort writes that the modus operandi of these stores is to get the revelers to “drop their drumsticks and pick up doorbusters.” Fortunately, the prospects for a happy holiday are looking brighter this year. 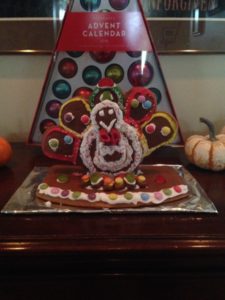 Forget scrambling for the latest bargains. Many stores are closing on Thanksgiving day to allow employees to spend time with friends and family. Bring on the gingerbread turkeys!
Photo by Rachel Tomis. Turkey craft built by Rachel Tomis and the author.

Perrefort continues that, “at least a 100 retailers have decided to open before midnight on Black Friday.”

Despite these numbers, or perhaps even because of them there’s been much public outcry from customers and employees alike. Protests and petitions, Perrefort writes, have been springing up and are only causing more support in keeping Thanksgiving a holiday about being together with family and friends, not chained to a cash register.

The Huffington Post reports that due to this public outcry there are thirteen stores that have pledged to have their Black Friday sales strictly on Black Friday rather than Thanksgiving.

The T.J. Maxx, Marshalls, and Homegoods trio, stores that are popular in Fairfield and Westport, respectively, will be closed. The company’s spokesperson Colleen Beauregard explains in short, “We consider ourselves an associate-friendly company.”

Gamers and Bookish types, both enthusiastic customers and employees alike are also encouraged to hang with their fam and friends on Turkey day. The Huffington Post adds that Barnes and Nobles and GameStop are also closed.

It’s heartening to know that even Costco and Sam’s Club will be shutting their doors this Thanksgiving.

Demanding a lot of employees who may be overworked and underpaid, as is the case with notorious behemoth Wal-Mart goes directly against the tradition of the holiday. Thanksgiving is rooted in togetherness, sharing and feeling grateful for loved ones and experiences. Only time will tell, but prospects look bright that with these widespread closings, that this Thanksgiving won’t be tarnished or swept to the wayside and smothered under a shop-till-you-drop mentality.

What other retailers who are closed this Thanksgiving? See the Huffington Post article here.