Shoot, Why Does This Keep Happening?

In October the nation was rocked once again by another senseless shooting in a southwest Oregon Community College. According to Everytown for Gun Safety, an organization advocating gun control, it was the 45th school shooting this year. It makes us wonder when these tragedies will end. Unfortunately Umpqua Community College has become just another statistic in this gruesome growing trend. 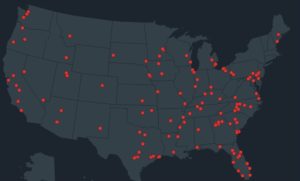 National map of 150 school shootings since 2012. Courtesy of EverytownforGunSafety.org

The shooter, identified as 26-year-old Chris Harper Mercer, was armed with three handguns and an automatic assault weapon the day of the attack. Mercer was enrolled in the same class where he killed 8 of his fellow students and the class instructor.

According to an interview on CNN, Mercer singled out Christian students only. Mercer was quoted as telling his instructor he’d been “waiting to do this for years” before firing the fatal shot.

Described as a person who kep to himself, Mercer did not have friends in school. However, his social media accounts detail his membership in the Irish Republican Army, a terrorist group based in Ireland known for ommitting  violent acts against the British government in the past. Mercer was killed in the ensuing shootout with police, ending his rampage once and for all.

4Chan, a web bulletin board, posted a possible forewarning to that devastating day. “Don’ go to school tomorrow if you’re in the northwest,” someone anonymously wrote.

Commenters replying to that post actually encouraged the anonymous poster. He replied with notes of gratitude.

Even though it’s nearly impossible to link the post to any individual person due to the site’s anonymity, it was safe to assume Mercer wrote it. After the shootings comments praising the act were added to the original post.

Regardless of what occurs during these disasters, we still tend to question where people like Mercer get their motivation. Is it the result of built up tension or someone having reached some emotional breaking point?

Is it a gun control issue or a societal one? Sadly we may never have a single distinct profile of potential shooters. However, we can examine what’s happened in the past and make connections.

Chris Gough, Director of Public Safety here at Housatonic, says possible motivations can be the result of many contributing factors, but no single warning sign can be pinpointed.

“The causes are all over the spectrum, but there are some similarities,” Gough said. “Some signs seen in past shooters were definite: the person was a loner, lived at home with his mother, and had access to weapons. It’s difficult to say what sets them off.”

Samantha Mannion, Coordinator and Professor of HCC’s Criminal Justice Program, believes that one single general statement can’t be made about what drives someone to perform such an act. “Everyone has a unique profile. We have to factor the mental illness piece in [but] the one commonality many of them have is that they have this desperate need for attention. They want to have posterity, they want to have attention, they want validation, they want the media to come running and people to know their names,” she said.

There are many misconceptions about shooters. “[People often think] they’re all crazy [and] predominantly male, but these disasters can happen across the board,”  Gough said.
Mannion agreed. “We very often misconceive these people as being outsiders, bullied, [with] trenchcoats. You find that for a lot of them, they kind of blend in. Maybe there wasn’t something so strange and different about them. Maybe they moved among us but the media downplays that because it’s so terrifying to think about the fact that you could be interacting with [these] people,”

So what can we students do to protect ourselves here at HCC? Students and faculty alike can watch out for each other. Gough suggests to look for behavioral, physical and even economic changes.

A shift in a person’s attitude and clothing are some of the easier ways to spot a potential problem. (Keep in mind that not everyone who goes through something is a possible shooter.)

We are getting better at detecting and preventing these situations, according to Mannion. “Having this happen as much as it’s happen has given us insight so that we can start to build certain profiles. Maybe there are some people who may have some behaviors that raise red flags earlier on in the process. Try to address problems at a lower level before they escalate.”

HCC’s Campus Security Policy and Campus Crime Statistics reminds us that we all should “be aware of [our] responsibility for [our] own security and the security of others.”

Our public safety department keeps the crime rates low with less than 7 reported nonviolent crimes since 2012. But the rest of us still function as the “eyes and ears” of this community, as Gough put it.

Honestly, we’ll never be sure why someone would decide to inflict an immeasurable amount of pain on others. People seem content to place the blame on guns or mental illness. The truth is no one but the shooter will ever really know what set him or her off.

What we can do is watch out for each other! Listen to what someone is really saying, or not saying for that matter. Who knows? Maybe it’ll save your life.