Social Media Activists Won’t Change Anything: But We Can and We Will

Many people complain that social media is plaguing our society. It is blamed for having created a generation that lacks face-to-face social skills. What these naysayers fail to realize is that social media is a powerful tool. It has helped create and bring attention to multiple political and social movements. Social media has actually changed many things for the better.

One example is the #BlackLivesMatter political movement. It was a popular trending topic on Facebook and Twitter that started in 2012 after the shooting of  young Trayvon Martin.

The hashtag or trending topic, was started as a way to bring attention to act and allowed people to voice their outrage about that act of senseless violence. The hashtag has now turned into a well-known movement all over the world thanks to social media, specifically Twitter. It has also grown and emerged to become the most active social media movement to this day.

Other movements that have been created as a result of social media are #BringBackOurGirls. This one addressed  the news story regarding the kidnapping of 300 Nigerian schoolgirls by the Boko Haram terrorist group in April of 2014.

Unfortunately, though, the girls have still not been found, but the movement helped to bring awareness of what happened. People from all over the world were moved to donate money to help find the girls.

I have over 1,042 people who care about what I say and interact with me on my Twitter account, the number is growing everyday. About 85% of the people who I follow/follow me are social media activists.

Another social movement of note is #YesAllWomen. This one is part of the feminist movement and it was designed to bring attention to issues such as sexual harassment, abuse, and assault that women have to face everyday. Exploring this hashtag on Twitter and Facebook gave insight into many issues women deal with on a daily basis, and why the harassment, abuse, and sexual assault of women needs to stop.

Hashtags  #Ferguson and #HandsUpDontShoot were quick to become popular movements on social media. It was created in response to the shooting of Michael Brown by police officer Darren Wilson.

It helped protesters highlight the injustice, and racism that is prevalent within the justice system. It also focused on the fact that not enough is being done to stop police shootings of young black men.

Many people unfamiliar with social media and its potential for enacting social change think that those who use it are taking the lazy way out.The term “slacktivism” has been coined by people who do not understand the positives of social media. It’s a term designed to taunt social media activists.

Nonetheless, while it is apparent that many people do not quite yet understand the power of social media and its potential for creating positive change, it is here to stay!

Housatonic student Niles Wilson says that he found out about the #BlackLivesMatter movement through Twitter and sees it frequently, he also saw that because of social media the BLM movement has been featured on the news numerous times.

Another HCC student, Steven Eszenyi, adds that he first heard about the BLM movement through Facebook and that he thinks social media does a great job in influencing young people to do something.

Many students and young adults use Twitter as their main news source, like HCC student, Edival Rios. He says that he has a Twitter and uses it to find out about what is going on around the world. He also adds that the two most prevalent movements he sees on Twitter and other social media are the #BlackLivesMatter movement and the feminist movement. He likes to see that young people are getting more involved with change for the better. 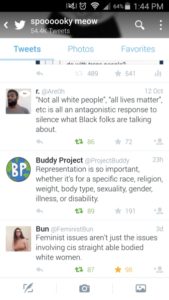 My Twitter timeline showing that social media activism is everywhere.

An avid Twitter user, Julie Baronowski, a student at Worcester Technical High school says that “social media (mainly Twitter) has brought so much awareness to me and has educated me more about social issues than anyone/any class ever has.”

Baronowski adds that social media spreads news around so much faster than televised news and has made it easier to access information.

Dr. Pamela B. Rudledge’s article on Psychology Today says “If sustainable activism requires passion and commitment, then it makes more sense that social media will facilitate rather than decrease advocacy by connecting more of those who do have passion.” She also adds, social media networks cross technologies and have immediate impact that gives it urgency, makes it personal and allows for immediate individual action. This is particularly important in raising donations quickly and spreading critical information.

Have you seen any movements/ activism on social media?  Did it help to change your view on any social injustices?  Comment below!