“Boys Will Be Boys” Just Doesn’t Cut It

The late afternoon sun was smiling down on me and one of my girl friends as we walked side by side down a stretch of kitschy cafes and storefronts with colorful awnings. The mild August day we spent exploring New Haven’s lush green university district was coming to an end. Then, suddenly, on the sidewalk, a  ruddy-faced man with a receding brown hairline stepped directly into our pathway. His eyes lit up as he took us in, “Are you two together?” the words came out as a sharp punctuation in the air.

It was so abrupt I felt my face crumple in confusion and voiced a default, “Huh what?”

Before I’d even finished processing what this grease ball was rasping out at me, he came at me, full frontal, and brushed against me.

While he didn’t exactly cop a feel, or hold my boob like the Korean gamer did in Felicia Day’s off-beat comedy Youtube series, “The Guild,” it was still insanely creepy and it left me feeling not just shaken, but seriously puzzled.

I’d faced street harassment from a variety of creeps before, but never had it gone to a physical level.

The first thought that ran through my mind was “What the HELL?!”

I didn’t even look back or meet the guy’s eye contact. I tilted my head ever so slightly, acknowledging that I heard him, and kind of fluttered my hands in a “swatting away” motion.

“I’m fine, I’m okay,” I replied, although looking back on it, I’m not sure he even heard me.

The swish of the fabric of my floral print dress against my thighs, made me feel dirty. This was one of my favorite outfits and for the first time, I’d felt ashamed for wearing it. Was it the navy blue paneling around my shoulders and collarbone or the flirty length of the dress that made him feel like he could touch me like he did?

Unfortunately, these experiences are far from rare.

Holly Kearl is a widely known advocate for ending gender-based violence and founded the nonprofit organization Stop the Street Harassment. In an article published in UK’s Telegraph Kearl says, “Street harassment comprises actions and comments between strangers in public that are disrespectful, creeping, threatening and unwanted.” 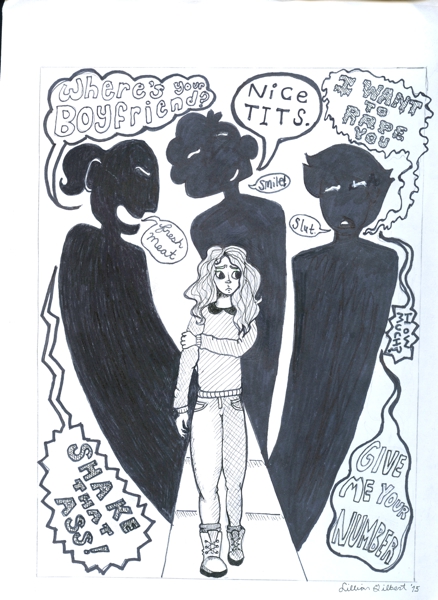 All of the comments above have been said to the author and other actual women.
Pen and ink drawing by Lily Gilbert.

I’m among the ranks of women that regularly face street harassment, but had never actually been touched like that before. It was relatively tame compared to what some other women have faced. But it still doesn’t change that it happened in the first place. Hell, it’s insanely wrong that it’s still going on at all.

STSH has conducted many studies that have otherwise been overlooked or ignored. When Kearl surveyed 811 women in 2008 about their own experiences with facing street harassment she found that “50% have to cross the street and find alternate paths to their destinations” and that “26% feel as if they have to lie about a significant other to get perpetrators to leave them alone.”

Even when I walk around the neighborhoods in my fairly well-to-do Fairfield town I’ve been the target of many cat calls, whistles, and shout outs.

There was a day that I was walking on a sidewalk when a group of young guys in a SUV whizzed by me shouting out something about me “being a honey” with a definitely “Mmm YEAH” thrown in there. They slowed down as they went by so one of the men could slightly hang out of the window and he actually fanned out a wad of money at me.

On the website Hollaback! created by Kearl and other activists, street harassment is defined as, “exist[ing] on a spectrum.” And while forced conversation or shout-outs may fall on the “milder” end of the scale, they are anything but insignificant.

Psychologist Kathryn Stamoulis writes in Psychology Today about one of her clients, a fourteen-year-old girl, who faced this. “On an almost daily basis, men were making sexual comments to her when she was on the street or taking public transportation.”

Cat calls like “nice tits”, “fresh meat”, or “hey sexy” aren’t about paying compliments to a woman. It isn’t about finding a woman attractive. Instead, it’s a power thing.

This barrage of negative attention is not only linked to lower self esteem but also self-objectification. A study in the Journal of Social Justice Research reveals that the cumulation of these interactions has been connected to higher rates of depression, eating disorders, anxiety and lower academic performance.

So before brushing off these comments as “harmless” or even “compliments” think again.

There was a time two years back when I was walking down a long windy stretch of sidewalk  when a guy called out, “I wanna rape you!” from a car window. There I was, with my jeans, black tee shirt, and my cloth bag of apples slung over my shoulder. How my simple spring time walk to my freaking grocery store ended up being a prime opportunity for some nobody d-bag to start lobbing crude language at me was beyond me. It was also one of the scariest moments in my life. An entire week passed before I felt secure enough to walk solo to even to my favorite library which is a hop, skip and a jump away from my place.

One of the most terrifying details about this disturbing trend is that in the book “The Macho Paradox” anti-sexist male activist Jackson Katz says, “Contrary to popular myth, the vast majority of boys and men who assault, harass, and bully girls and women are not sociopaths. They are average guys.”

In a 2010 article in the Christian Science Monitor, reporter Chloe Angyal weighed in on male college students “pro-rape” attitudes and other increasingly negative and harmful views of women. Angyal proposes that the “ugly reality” is that American culture isn’t “hold[ing] its young men to a high enough standard” and that “we rush to their defense when a woman accuses them of sexual misconduct”.

It’s not a matter of crying fire. It’s not a question of victimization. It’s about having a right to take up space and not have to be discriminated against or made to feel like my body is, sometimes quite literally, “up for grabs” because I have a vagina. Being a woman shouldn’t be the defining factor that somehow justifies these comments and reactions from men. To normalize this behavior, to settle on guys having the higher ground here, or the “rights” to weigh in on my body or anything about me because of my breasts, is to imply that not only is it “okay” to see women as less-than, but actually confirm that that’s exactly what we are. And to that I say, “WALK!”