The Science, Technology, Engineering, Arts and Math (S.T.E.A.M) conference filled Housatonic’s atrium in Lafayette Hall on Saturday November 7. More than 60 high school students from the surrounding communities were in attendance, including Bridgeport’s own Central, Bassick and Harding High Schools.

Students are hands on while President Broadie looks on.

The event was coordinated by Assistant Professor of Biology/Molecular Biology Robin L. Avant. Initially the event was designed for students in grades 9 through 12, but later it opened its doors to kids of all ages. Some of the youngest future innovators and leaders who attended this program belonged to the Cub Scouts pack 126.

Full-time and part-time professors in the math and science department came together to create and display 15 interactive exhibits to stimulate interest in the S.T.E.A.M disciplines. 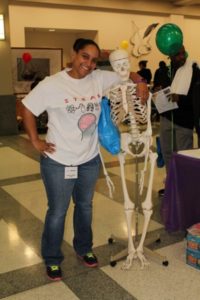 Science was represented in five hands on exhibits. One exhibit that drew interest was presented   by the Bridgeport Wildlife Guards from Audubon Connecticut. It taught students how to identify the species of birds based on their beaks.

Technology was a blast for many students. Of the three exhibits one was focused on electrophoresis gel. This is a highly advanced procedure that separates DNA based on its size. This station was run by Donna Rhoads, an Instructor of Biology here at Housatonic. Rhoads said kids were excited by the exhibit because as they relayed to her,“It is like the shows on TV.”

Engineering was fast and fun at the Pinewood Derby Race exhibit run by Alonzo Wiggins, Cub Scout Leader of Pack 126. A wooden race track stretched from the doors of the Financial Aid office all the way to the doors of the Theater Arts Center. As the model cars raced down the length of track, the students raced even faster to meet the car at its final destination.

Art is the newest component in what used to be STEM (Science,Technology, Engineering and Math.) The fusion tree was an artistic exhibit I ran.  It allowed each student to create their own unique keepsake pendant. “This is fun” said Marvin Verano, a cub scout from Pack 126.

“I like making things with my hands,” Verano added, as he crafted a beautiful and creative fusion tree and hung it around his neck. 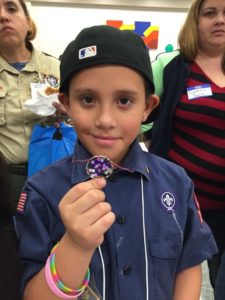 Math was cool and hands on as students built 3D geometric configurations, with toothpicks and spongy squares. This exhibit was run by Karen Vo, an HCC staff member .

“It gave kids the opportunity to come on their own and enjoy something that isn’t in school, but school related,” said  Kyla Rascoe, 16-year-old Ansonia High School student.

There were many exhibits for the students to explore and enjoy. The program’s structure was set up for each student to spend a total of 10 minutes at each table. However, some students stayed glued to the exhibits that interested them the most.

In conjunction with the interactive tables and displays, there were tours to the manufacturing center and the art gallery. “I don’t have a favorite subject in school, but I like the tour,” said Stephen Rochester, a Bassick High School 9th grader. 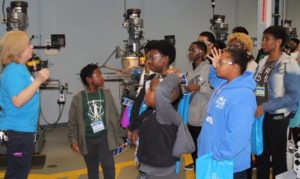 “I like how they made metal and stuff,” he added, after visiting the manufacturing center.

Many heartfelt thanks to all the, staff, faculty,  volunteers, vendors, and the art club for all their wonderful and creative hard work that made rocket science fun!