Tucked away in a side hall on the third floor of Beacon Hall lie the offices of the Forward program. Stereotyping is wrong, but I’d bet if you’re an average, everyday HCC student, you haven’t heard of this program or its mission. It serves those students interested in healthcare and IT, and yet, its ideas–such as making sure group projects are actually collaborative, rather than huge workloads for the designated non-slacker–could be beneficial if implemented on a broader scale. 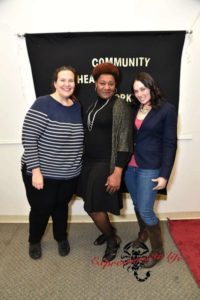 Alese Mulvihill, who works as coordinator of the program, gave more in-depth information about Forward’s origins, goals and the students it serves.

“Forward began with a grant that was funded by the Department of Labor,” she said. “They wanted to give money to community colleges to increase student success and completion rates, and increase job placement through building partnerships between colleges and employers.”

The Department of Labor based the programs that grant funds on those fields which had high staffing needs. At HCC, the program offers credit and noncredit options in healthcare and information technology, though at other participating colleges, environmental technology is also offered. Housatonic is part of the Northeast Resiliency Consortium, a group of seven East Coast colleges that have implemented the program.

While Forward students “run the gamut,” there is a particular focus on the un- and underemployed, TAA (Trade Adjustment Assistance)-eligible, and veterans.

One of the hallmarks of the program are the additional support resources given to students. These begin with what Mulvihill described as an “ombudsman” type of experience in getting through the steps necessary to become an officially registered student, and resiliency training. This training is built into orientation and gives Forward participants key success skills.

“Topics like etiquette and utilizing your syllabus are covered, as well as different resiliency techniques,” she explained.

Another important part of the program’s resources are those which relate to employment. There are experiential learning components, including job shadowing, internships, and externships, resume assistance services, and job placement programs that connect students to hiring employers in the community.

“There have actually been a lot of situations where our students reach out to community organizations for help, and later find employment with those same organizations,” Mulvihill said. Some of these organizations include Southwest Community Health Center, Optimus Healthcare, LifeBridge Community Services, People’s Bank, Goodwill, and Job Corps.

Mulvihill is able to give success stories that detail past participants’ post-HCC lives because the Forward program keeps in touch with their alumni. They call and send emails that ask how former students are doing.

“There was a student that came in who was unemployed, had very low confidence, and was lackluster in interviewing techniques – she just didn’t know what to say when being interviewed,” Mulvihill said. “We explained how to answer interview questions, and used answers that would be ready for employers.” This student completed two Forward programs and got jobs in both her areas of expertise.

Another story detailed an older student with a terminal illness.

“We had a student with cancer who wanted to work with hospice. She completed her program, despite her age and her insistence that she could not complete college,” Mulvihill said. “She flourished in class while going through radiation. Though she can’t hold down a paid position because of her illness, she now volunteers at a hospice.”

It’s worth noting that Mulvihill stresses a definition of success that is grounded in holistic personal journeys rather than checklist-based outcomes.

“Success is when somebody ends up better than they came in,” she said. “It doesn’t have to necessarily mean finding a job or completing a program.”

Since Forward is grant-funded, its sustainability is a looming concern. Ed Fians, who is employed as a content specialist by the Northeast Resiliency Consortium, said that he is “on the clock until March 2017,” as the program recently received a six-month extension. Fians, who has worked with the program since May, spoke of what his position entails.

“I work to monitor and facilitate different programs that map the five competencies of resiliency, and oversee how they are being implemented,” he said. “I ask professors, ‘What competency are you developing explicitly by giving this assignment?’”

Those five competencies are self-awareness, collaboration, reflective learning, critical thinking, and adaptability. Fians elaborated on how, exactly, these competencies can be brought to life.

“There’s an IT instructor at Capital Community College, Saaid Elhadad, that teaches a networking class held in a computer lab. He establishes a rule that states, ‘I’m not going to answer your question first; go to your classmates before you come to me’, and it develops collaboration by simulating a workplace environment where there is no professor at the head of the room,” Fians said. He also spoke of how Laguardia Community College, another NRC institution, “embedded a unit within their EMT course that teaches skills like maintaining eye contact, and how to engage with someone whose loved one just died.”

Fians recognized that the skills associated with the five competencies have relevance beyond the Forward program. “If you’re going to serve the public in any facet, you need the five competencies,” he said. As an English and philosophy professor, Fians informally develops the collaboration and reflective learning competencies by requiring students to leave comments on their own essays before he grades them. He finds that it helps students correct their own mistakes and become better writers, as they often “pull together great thesis statements out of the messes they had started with.”

Morgan Dancy works as Forward’s assistant coordinator and an adjunct professor of English. She also elaborated on how she brings the ideas from the program into her Literature and Composition class.

“I had an email come in from a student during the first week of class about how they had gotten into a car accident, but there was no discernible name attached to it,” she said. “I set aside some time in the next class period to give a mini-lesson on how to write a professional email.”

She also implements the collaboration competency when assigning group projects, ensuring that they are truly group efforts with each student actively contributing.

“I give each student a role within the group that is responsible for certain tasks. The historical researcher focuses on the background and time contexts of the story, the literary luminary highlights particularly interesting quotes, and so on,” Dancy said. She also requires that each group member complete both self and peer evaluations.

Though Fians and Dancy don’t teach courses in the IT or health professions, they recognized the value of Forward’s ideas and found ways to apply them to their own curricula. Fians also commented on the bureaucratic rigidity and ineffectiveness of mainstream pedagogical beliefs, and connected Forward’s focus on resiliency to new ways to teach students.

“Resiliency leads to experience, and experience leads to a lived understanding that, in the classroom, can allow content to have more meaning for students,” he said.

Mulvihill, like Fians, recognizes the complications that barriers between students, faculty, and staff can create.

“I work with a ‘no silo’ attitude, and I think that the better everyone communicates with each other, the more we are able to achieve student success,” she said.

Dancy expressed similar sentiments. “Everything is interconnected, and every department at the college affects one another,” she said, before highlighting Forward’s larger relevance. “Resiliency started out as one small thing, but it’s applicable to students, administration, faculty, and staff – they’re ideas everyone can use,” she added.

Dancy, when speaking on the uncertain future of the program and its funding, seemed confident and worry-free.

“Even if Forward doesn’t get future funding, faculty have learned new practices that are sustainable beyond the life of the grant,” Dancy said. “The initiatives it brought about have a lasting impact.”