Who Knows What’s Going to Happen?

Imagine having to wake up every day worrying about what to wear, whether you are going to fit in and wanting to be accepted by everyone. Teens all over the world are scared about what the “popular” kids are going to say about them next. What those popular kids are doing is called bullying. Bullying does not only happen in middle school or high school but can also follow you here to college.

Around the early 2000s, everyone thought bullying involved things like big kids picking on little kids and stealing their lunch money, like what’s shown on TV.  Nowadays, people bully verbally, physically, or even socially, in other words, cyber bullying.

Because of bullying, nearly 30 percent of students are either bullies or victims of bullying, and 160,000 kids stay home from school every day because of fear of bullying  according to a 2015 study by Yale University. 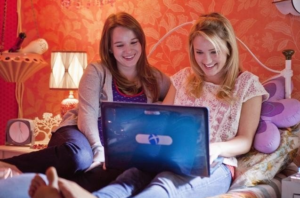 Things take a turn for a worse for Taylor (played by Emily Osment) when she becomes a target for bullying in the ABC Family Original Movie Cyberbully.

I see people I have graduated with changing the way they look just to fit in with a certain crowd.  Those people you want to try and fit in with can verbally bully you without realizing it.  It is crazy to think that people in college who are suppose to be mature and an example to teens, act as if they’re 15 and want other people to feel low about themselves.

“There are times when I walk into the cafeteria at HCC and I see people staring at me, their eyes following me as I sit down. I hear them talking about me as if I wasn’t there,” says Juliet Chin, a General Studies major.

Cyberbullying, another big issue, is related to low self-esteem, suicidal ideation, anger, frustration, and a variety of other emotional and psychological problems.

In middle school, one of my “best friends” made a fake profile of a guy and made me believe someone cared about me. This went on for a year with me believing that it was an actual person I was speaking with. Later on I found out it was them by my friends, who the girls confessed everything to, taking me out of class and telling me the truth in front of my 8th grade teacher.  I was so shocked and I reported it to my guidance counselor. Those girls later received probation from the state but that did not stop them from messaging me on Facebook and continuing to make me feel like I was less of a person.

However, here at HCC not a lot of students believe in telling an adult.  They believe in handling the situation themselves or just going straight to the police.

“As a teen, I rather just deal with a situation myself, but if I had to go to an adult here in the school, I’d go to a professor I have a close bond with,” says Joseph Marsan, who majors in Pathway to Teaching.

Because of cyberbullying, suicide is the third leading cause of death among young people, resulting in about 4,400 deaths per year, according to a 2015 study by Yale University.

There was a point in my life where I wanted to give up.  I have been bullied from the age of 6 and by the time I was in high school I wanted to take my life away.  Luckily, I went to a girl group named Girl Talk where other teenager girls in my age group were going through the same issues as I was.

Knowing that there is help out there and techniques to control this from happening is amazing.  Are you willing to let those who make you suffer win or prove them wrong?