Answering the Call to Rise

Community is our college’s middle name. In the spirit of that, this coming spring semester Housatonic will be host to the first ever community reading program featuring,“We Are Called to Rise,” the debut novel of author Laura McBride.

McBride’s book weaves a yarn of four characters’ perspectives from a precocious immigrant child, to a battle-hardened soldier readjusting to civilian life, to a middle-aged mother grasping to keep her dysfunctional family from completely unraveling, the cast in this modest 300-page book brings forth a deluge of diversity.

Jennifer Lutris, a Tech Services and Reference librarian who has been here at HCC for eleven years, says the idea of coming up with a group read, in specific, a “One Book One College” event came to her one day on her ride to work. Previously there have been Writers in the Housatonic Classroom events for students and a program called “The Big Read” for faculty and staff, sponsored by the Center for Teaching.

One Book One College was proposed independently of these programs, but will essentially be a massive collaborative–and community–effort that ends with the author actually visiting campus.

“Community reads are popular,” Lutris says and explains faculty and staff in an on-campus book club were the first ones who were taken with the novel, We Are Called to Rise.

“It’s diverse, and they thought it would be a good match for our student body. Some find it an uplifting read,” she said. 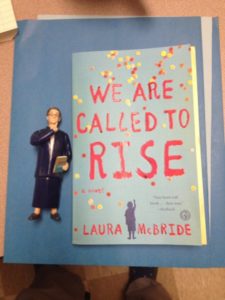 The all-mighty librarian SHUSHING powers can’t keep us down when we’re “Called to Rise!” Photo courtesy of Jennifer Lutris

Lutris is also inspired by her time spent working full-time at the Trumbull Public Library, where there were several  successful “One Book One Town” events over the years.

Lynne Langella, Coordinator of Disability Support Services here at HCC, read the book last March and says she was impressed by all the perspectives in the book and how the characters took on a life of their own. The day after she’d finished it, Langella and her fellow readers emailed McBride, who is an English Community College Professor in Nevada.  Langella was stunned that,“[McBride] got back right away– actually that day,” and actually Facetimed for about an hour and a half with them.

The author lives in Las Vegas, and Langella says Bridgeport shares many connections and similarities with that region. Both have faced “deep financial troubles”, “are in processes of change”, and are “nestled between affluent communities.” This OBOC is a way for students to unite in their experiences and understand other perspectives.

“In the book people had all been damaged and hurt in some way, I have a background in counselling so I could understand it and the characters,”  and Langella says sharing her perspective with fellow staff and faculty readers made for a“real lively discussion.”

OBOC is still in its planning stages and is set to be two-fold. During the fall, faculty and staff are primarily the ones reading the book and deciding if and how they will incorporate it into their curriculums.

Professor Rebecca Adams is one such instructor. Adams’s English 101 curriculum is built around “We Are Called to Rise” and incorporates a variety of nonfiction articles based on the themes of PTSD, immigration, and childhood trauma among the other issues McBride addresses in the novel.

“We’re not looking at craft,” says Adams, “We’re looking at social issues raised by the book.”

Liberal Arts major Mwiche Siwingwa is a student who’s currently enrolled in Adams course.   She and her peers read assigned pages of the book independently and then have group discussions when they reconvene.

“A lot of these moments in the book make you cry, as I read it get teary eyed,” says Siwingwa.

She says that when she first started reading the book, she was less than thrilled. Yet, starting a dialogue is what makes this experience all the different, Siwingwa says Adams “encourages you to say what you don’t like about it. Keep that first reaction you have and question it. She wants us to have an opinion!”

As for what Lutris hopes students will get out of OBOC she doesn’t miss a beat.

“I hope they get an understanding for each other’s path in life. You can’t always jump into conclusions about someone’s past or their history. We’re all coming together and trying to get by, day by day.”

Adams is witnessing first hand just how students are reacting to the novel. These “deeply flawed characters” are really hitting a nerve for many of the readers, “There’s a shooting in the middle of the book and [my] students had animated reactions [and different] perspectives.”

Adams says that not only did it intrigue students but “many were actually sympathizing with the shooter and realized it was more complicated than a simple shooting by police.”

Professor Steve Mark, Director of  the Center for Teaching here at HCC, says it was essentially “a happy accident” that the CFT had already settled on “We Are Called to Rise” for their Big Read selection when One Book One College was making their plans.  They agreed to merge the programs.  At the CFT the goal is training faculty to be better teachers, which ultimately lays groundwork for students to have an excellent learning opportunity. So Mark is coming at this from yet another angle.

“The author designed it to be read in a weekend. It moves quickly and it’s very accessible,” he said.

One thing that’s on the top of Mark’s and the other CFT committee members agenda is to integrate this into programs and courses across the curriculum to “spark conversation among faculty and staff so they can support students [and] so [that] students will get the most of out the author’s visit in March.”

“We Are Called to Rise” is staged to make appearances in courses that go far beyond the bread and butter English and Literature courses. A committee of staff is coming up with a series of events such as creative writing activities, lectures about immigration, and HCC’s Veteran Representative, Jeff Stewart Veteran will be talking about PTSD aspect. Other “cross-curriculum and cross-campus” programs are in the works, and the results look promising.

As for what Lutris hopes students will get out of OBOC she doesn’t miss a beat.

“I want this to build relationships and understanding. Students going to an event meet,” she says.

That’s why this is, as Lutris says, “a catalyst to building relationships, and help make friends and reach out to others. There’s a potential to create these good opportunities and to meet students who aren’t necessarily at the same place in their life. New students, old students, students who are intimidated to meet others, students your own age, or older or younger–people further along in their education, and people just starting off.”