Race in America remains at the pinnacle of hot topics people seldom like to talk about, but Housatonic is confronting the race issue head on, exploring topics like the law murdering unarmed black men, women and children; the upgraded Jim Crow laws of mass incarceration; and major book publishers rewriting text books to skew African American history.

These are a few signs, that although African Americans in the United States have made strides towards progress, there are major areas that unfortunately remain the same.

In 2014, more than 100 unarmed African Americans were murdered by local law enforcement agencies, reports mappingpoliceviolence.org. Although there are more familiar names like Trayvon Martin, and Michael Brown swirling around Facebook pages and the media, there are many names that do not get mentioned.

In the case of the peaceful protest of Black Lives Matter, many photos mirror the images of the 60’s riots, a classic example of history repeating itself, in a time when there was little to no equality for African Americans.

The New Jim Crow of mass incarceration of African Americans is another means of segregating, and demoralizing an entire race. The “stop and frisk” laws also known as the “Terry Stop” have been in existence since the Black Codes, laws that pertained only to newly freed slaves, or “Freedmen” after the civil war. These laws allowed for racial profiling based on the color of one’s skin, which violated civil human liberties.

Although in 1954, the plight of a seven year old little Black girl named Linda Brown, in Topeka, Kansas, opened the doors of white institutions to minorities, minorities still face an educational system that is not designed for them.

Do African American students fail to initiate dialogue referring to race because they know very little about their history?

“I came up with a generation that for years and years we were taught to be ashamed of where we came from: nothing good came out of Africa, we did not mention Africa, we could not own our greatness, one because we did not know our history,” says African American Literature Professor Edwena Chance. 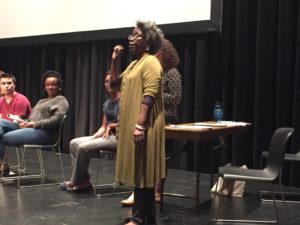 A tweet from an angry parent in Houston, prompted McGraw Hill to change their text book back to an accurate historical context. Mcgraw Hill saw fit to change the word “slaves” to “workers and immigrants,” as if African Americans came to America of their own volition and were paid wages. Entire academic history courses at Housatonic exclude minority populations; yet ask a student on HCC’s campus about race and they will tell you “everything is fine.”

The problem may lie within the educational system that fails to teach diverse students accurate accounts of their involvement in history.

HCC Student senate committee member Alisha Boyd thinks “young people today are more concerned with making money,” and not with race. However, if you take a look around the campus you’ll see how the white students hang out in the cafeteria’s spillover rooms, the eastern Indian students can be found in the library, and the black students congregate in the student activities center.

Students are busy these days, with work, families, and getting an education. There is little time to worry about race until it becomes an issue. As it stands now, “Students are not reaching out on a race basis,” Student Activities Director Kelly Hope says. “Race conversations can be a very scary, and uncomfortable place so they tend to say things that are very superficial.”

Many people do not like to talk about race because they “are afraid of being offensive or politically incorrect. . . there is a call to be politically correct, but first we have to be honest with ourselves and acknowledge the reality,” says Hope. The reality Hope speaks about is very broad and the answer one may receive depends on who they ask.

“When you look at education as far as HCC is concerned, we do have ‘minoritized groups’, I do not use the word minority because we are not the minority, we are minoritized,” she says.

Although HCC has a diverse student body, the staff is not as diverse. “I look at the student population, and I think here on our campus there is a disparity between the minoritized students based on race and ethnicity, and our faculty and staff pool,” says Hope.

“Access does not equal equity,” says Hope, “Providing Blacks with an education is only one piece.”

Along with educating students there are still areas that present problems for minority students. “There are many studies that prove retention rates are directly tied to a student’s ability to connect and be able to engage with faculty and staff who look like them,” says Hope.

However there are faculty and Directors at HCC willing to compensate for that gap.

“Learning about African American and other minority cultural contributions is important, however, minority diversity is not inclusive,” says Chance.

English Professor Karyn Smith is not content with dismissing the harsh realities of race either. She uses relevant literary authors and topics to open the doors of diversity. “I am mindful of who I’m including on my syllabus, and I make sure I have a diversity of readings and a diversity of writers, because I think it is important for us to see ourselves and other reflected in literature.”

Another professor at HCC, Geoff Sheehan, who is also Coordinator of the Theatre Arts program, grew tired of just talking about race issues, so he took action. He created a venue where conversations of race could take place.  In this  two day symposium, student and faculty were able to discuss race through literary readings, staged plays, and questions and answers period. This juncture was needed, so much so, that right after the literary readings, hands shot up in the air. However, students did not want to discuss literature as it referred to race, they immediately began to ask questions about contemporary race issues in the media. 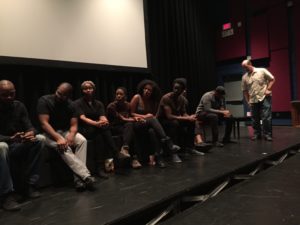 Does that mean students are waiting for permission, or venues to discuss what is happening in the world around them? “We need to have a theme piece once a month” Chance suggests. Perhaps this will give students a forum, in which they can talk about what really matters to them.

“It usually takes damage… or an explosion… or a wound… or an incident, and that’s what we talk about,” Sheehan, says punctuating each description thoughtfully. “Through the lens of an incident… eliminates all the other ways we can talk about it. We have incredible gifts and benefits from race but sometimes we don’t even acknowledge that, or we fight about that. But if we take the time to look at it from different angles, we can see all the ways race contributes and challenges us as people, individuals, and a society.”

Hope will continue to be a radical force within HCC to represent the rights and recognition of “minoritized” students. “I bring in real life experience so students can connect and realize how real life experiences apply in their academic endeavors.”

Hope continues to be a supportive resource for students not only within the Student Activities Department, but for all students. She often works ten to fifteen hour work days filling the gap as the only African American woman in a Director’s position on HCC’s campus.

Chance continues to keep race and diversity at the forefront of her literature classes, by offering students a plethora of diverse literary readings. “You can study anything through good literature. I believe in the concept of white privilege and the concept of black anger. Because it is who you are, the experience you’ve had, and what you have been taught at home. All of those things come together and shape who we are and especially with a hot button topic like race.”

What culturally diverse programs or classes could HCC introduce that would be of interest to you?  Comment below.