A Story of Scales: Fighting Inequality By Day, Mastering Music By Night

Andrew Pelletier has made a career out of serving underprivileged students. The 34-year-old has worked at Housatonic since May 2014, and he previously spent six years at Naugatuck Valley Community College. These two schools are located in cities – Bridgeport and Waterbury – that are notorious for their urban poverty and deprived school districts.  But as coordinator of the Center for Academic Progress (CAP), Pelletier is taking an active role in changing the educational outcomes of those victimized by their zip code. 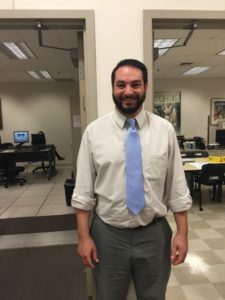 The CAP is a learning center that plays an integral role in the education of those enrolled in intensive developmental courses. These courses are the product of state legislation that cut low-level non-credit math and English courses; additional instruction and support are now embedded within them. The tutoring for these courses happens exclusively at the CAP, and entire sections of the courses visit once per week when students are co-taught by CAP staff and their respective professors.

But Pelletier did not immediately know that he would find the most satisfaction working in higher education. After earning his degrees – a Bachelor’s in English and a Master’s in Education – he set off on a trail of trial and error that had many stops on the way to HCC.

“My own experience making use of my degrees involved a journey of exploration through every grade including kindergarten, high school and everything in between,” he said. “While public school was not for me, I have an immense amount of respect for the hardworking educators who serve children. I found that for myself, working with older and adult learners was something that came naturally and produced a deep sense of fulfillment.”

“Learning is most productive when you’re directing yourself in it, and making use of others’ expertise to further your own learning goals,” he said. “Music gives me the chance to engage as an active, lifelong learner,”

Though Pelletier has spent 16 years playing bass guitar, he still says he is “always learning as a musician.”

The connection between Pelletier’s beliefs about music and learning, and students and education, is not hard to miss. It gives insight into why he found professional fulfillment at the college level.

An important part of Pelletier’s work at the CAP are the “refresher programs” that “allow students who don’t place into college level courses to address skill gaps” before re-taking the placement test and enrolling for the semester. Pelletier believes that programs such as these can lead the way to educational egalitarianism.

“One way to fight inequality is to reward and replicate programs that produce positive results,” he said. “It has been exciting for me to see innovation encouraged within Connecticut’s higher education system. Programs like the CAP that can be scaled and replicated are a great tool for addressing students’ needs.”

Pelletier’s work at HCC is not a radical departure from the kind he did while at Naugatuck Valley, where he implemented programs to aid underserved students from Waterbury and its surrounding area. One such program – the College Access Challenge – offered another solution to preparedness deficits.

“We worked with the Waterbury high school English and math teachers and coordinated a program that brought professors to the high school classroom two days a week,” Pelletier explained, with the inferred goal that this co-teaching could alleviate students’ need for remediation.

Pelletier described it as a sort of “study hall for high school students who came to the college after the school day ended, where they’d have access to tutors in all subjects. The program has a lot of history behind it, and the kids were great.”

Hyoja Tully works in the CAP alongside Pelletier as a math tutor, and spoke of the “pleasant” experience she has had as his colleague.

“He’s personable and he makes every student feel comfortable. Even if he’s having a bad day, he’ll still put a smile on his face and go on with what he needs to do,” she said.

Jennifer Nohai-Seaman, a math professor who co-teaches with Pelletier, also commented on his receptiveness.

“I offer ideas on how to help our students from time to time and he takes them into consideration,” she said. “We work together so that our students get their needs met.”

Pelletier says that if he wasn’t working at HCC, he would be in a band on tour. But for now, he seems content balancing his roles as coordinator and student. He plays the former while at work, but afterwards, he is the one learning and practicing a skill that’s new to him – singing.

“It’s hard to learn, and it takes second priority to my instrument,” he said. “But I like to practice in the car. I enjoy having a hobby I can work on while stuck in traffic.”