Being a fan of sarcasm and witty puns, it was no surprise that I would hop on board to seeing Bo Burnham’s comedy tour when he came to Connecticut. I have been a fan of Burnham’s work since he released his first EP in 2008, “Bo Fo Sho”.  Burnham only followed his album with more genius, such as his comedy specials, “Words, Words, Words” on Comedy Central, and with “What,” which he let viewers enjoy for free on YouTube. Burnham even wrote a clever and charming poetry book, Egghead: You Can’t Survive on Ideas Alone.

As a lover of ALL this young comedian’s content, whether it be his television series, writing, or music, when Burnham announced the launch of his “Make Happy” tour with over thirty different locations, it certainly did make me happy.

I was floored to hear Burnham was taking his jokes to a local venue added later on his tour, and I purchased two tickets as a gift for my brother’s birthday. We attended the “Make Happy” show on December 5 show in Torrington  at the Warner Theater.

Adam Newman, a comedian from New York, opened the show with a 25-minute stand-up routine that evoked a roar of laughter and set the mood for the rest of the show. 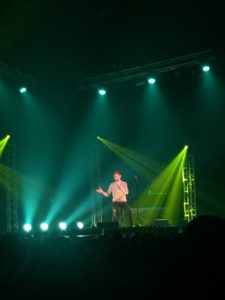 Not a bad seat in the theater while watching Burnham’s crazy, hilarious antics. (Photo by the author)

The crowd was enthusiastic once Burnham’s set had begun. The entire duration of his 75 minute show was filled with colorful lights and hilariously inappropriate comedy.

With an entire new set of jokes, songs, and comical shenanigans, I was in tears from laughter by the time Burnham had finished the show. Burnham interacted with the crowd, danced in sync to vibrant, flashy lights, and captivated everyone who bought a ticket.

Being a long-time fan of this comedian’s work, I was completely fulfilled and highly recommend anyone who admires a lot of humor mixed in with songwriting genius to buy a ticket next time Bo Burnham comes to an area near them.