The Cartoon From Beyond Our Stars: Why You Should be Watching Steven Universe

In a point of our lives where the impending doom of growing up is looming over our heads, it would be nice to take 10 minutes out of our day to feel like a kid again, to be open to imagination and adventure again without the thought of finals pounding in the back of our minds.

Steven Universe, a fresh, exciting and funny cartoon in its sophomore season, is the remedy to any stressful late night study session, often going from heartwarming to heartbreaking in a span of one episode. 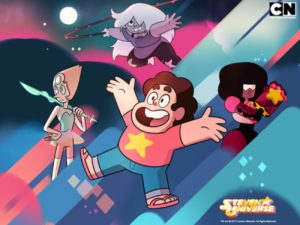 This series, airing on Cartoon Network, focuses on Steven Universe, a young boy who is the newest member of a team of aliens that fends off attacks of other alien creatures on Earth. This extraordinary team, known as the “Crystal Gems” consists of Garnet, the tough, no-nonsense leader of the group who isn’t as she appears, Amethyst, the zany, loud and headstrong member with a troubled past, and Pearl, the intelligent, precise and neurotic second-in-command with close ties to Steven’s mother, Rose Quartz.

The cool thing about this take on aliens on the show is that they are all gemstones but drawn in the form of human bodies that are uniquely drawn to suit their own personalities, each of them carrying their respective gem on a different body part.

So that begs the question, how does the hammy, excitable and sensitive Steven fit into the picture? He is the first offspring of a gemstone and a human, born from his mother Rose and his virtuoso rock star father Greg Universe. Seeing as both he and his mother can’t exist, Rose passed away, and Steven carries her gemstone in his belly button.

Each gem grants the Crystal Gems a unique ability that helps them in their fight to protect the Earth. Other characters that act as the denizens of Beach City include Connie, Steven’s bookish best friend and partner in crime for his wild adventures, Lars and Sadie, workers at the local donut shop the Big Donut, and  the Cool Kids consisting of Jenny Pizza, Sour Cream and Buck Dewey.

Created by Rebecca Sugar, former storyboard artist and writer for Adventure Time, this show is already breaking barriers as it is the first cartoon on the network to be solely created by a woman. And while this could attest to the magical girl feel to the show and the show protagonist not carrying any macho, hyper masculine traits, it is a cartoon that is able to capture both female and male viewers with their clever writing, funny moments and action-packed fight scenes. While the show journeys into fantasy and the galaxy, it is also rooted in real themes and ideas, such as growing up without a mother, finding your place not only on a team but in life, getting past a betrayal, learning how to forgive, and finding the bright side to any situation.

Much like Adventure Time, Steven Universe is a show that can be started at any time but is makes more sense when started at the beginning, introducing many compelling storylines and cliffhangers dealing with Homeworld, the gemstone war that took place on Earth, and the everlasting mystery of Lion, Steven’s animal companion, and his origins.

And if that isn’t enough to get you hooked, the show has many musical moments and catchy songs that you will finding yourself humming in the shower, including their theme song.

One of the most notable songs on the show would have to be “Stronger Than You,” sung by Garnet, who in fact happens to be voiced by popular UK singer Estelle.

Steven Universe has a massive following on the Internet, and fans often speculate on theories and future storylines and draw their own art of the characters and some original works of their own. Ultimately, this show is a love letter to old video games and fantasy while incorporating modern ideas of women, family, teamwork and what it means to be a hero.

Steven Universe is currently on hiatus but is in production and set to return soon. But if you need to catch up or start from the beginning, you can start the adventure at http://theworldofstevenuniverse.blogspot.com/