Mysterious purple folding chairs were discovered around Housatonic at the end of February. Each one displayed a bright yellow note left by imaginary students who couldn’t make it to school that day. Who would want to announce their absence from class to the rest of the world? 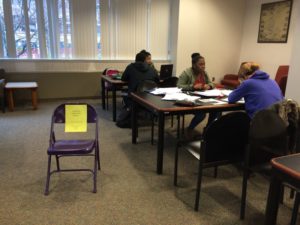 Each missing student shared the reason he or she was gone. One spoke of threatening phone calls and another of being pushed down stairs. Additional messages said, “I’m Not On Campus Today because my attacker sits two rows behind me” or “My tires were slashed this morning.” 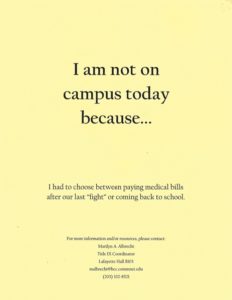 A note from one of the purple chairs. (Photo by Kerri Lloyd)

All of these signs pointed to abuse.

“The purpose of the chairs and statements is to show examples of realities, circumstances and choices faced by individuals in abusive relationships,” said Marilyn Albrecht, Title IX Coordinator at Housatonic.

This program is called “The Empty Chair Campaign,” a project Albrecht brought with her from her graduate work at Rutgers University in New Jersey.

As the Title IX coordinator, Albrecht coordinates the college’s responsibilities under the Title IX Violence Against Women Act, Campus Sexual Violence Elimination (SAVE) Act and other state and federal regulations.

According to Title IX of the Education Amendments of 1972, discrimination on the basis of sex is unlawful. In recent years that has been expanded to also protect students in cases of sexual harassment, discrimination and misconduct. Every college in the country is required under federal law to have a Title IX coordinator to address sex discrimination in its education program.

Gough sees verbal and texting abuse, between couples, as the most common form of abuse on campus. “It’s all about intimidation and manipulation,” he said.

Relationship or dating violence stems from a partner’s false belief that they are allowed to control someone else. Acting on that belief in an abusive, violent, or controlling way is a crime under state law.

If you are dating someone who threatens violence, keeps you away from other people or uses money to take advantage of you, you may be in an abusive relationship.

Abuse can include “stalking” behavior like waiting outside your classroom or workplace without permission, unwanted telephone calls, emails and text messages. These can cause mental health problems that might interfere with your education.

If you’re in need of help, resource services are available at the Counseling Center on campus, located in Lafayette room A-108 near the admissions office. You can also report a violation of IX to any faculty or staff member.

If necessary, Public Safety can set up temporary restraining orders during an investigation of possible abuse.

“We’re here to help in any way we can,” said HCC counselor Linda Wolfson.

For more information, Title IV Coordinator Marilyn Albrecht can be reached at (203) 332-8521 or at [email protected]