A Show Worth Seeing

The Performing Arts Club showcases the talent of Housatonic students in shows every month and it is something worth checking out. The most recent show took place on March 8, with the next happening on April 12. Aspiring actors, students just having a good time, and even writers all come together to make these shows happen.

George Stewart, Club President, is in charge of making sure everything runs smoothly from the acting down to the writing.

“I do a little of everything on the shows. I act and write,” said Stewart.

Stewart is usually doing improv or stand-up comedy on the shows. That does not mean that everyone else is doing the same.

“Our shows feature a little of everything. We have singing, dancing, improv, and other scripted skits and performances,” he said.

Improv is when the performers do a scene, but make up the lines and events as they go. Actors must be good at creating on the spot. 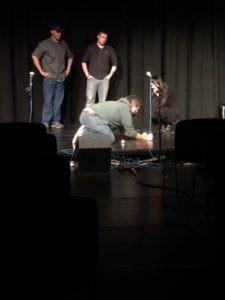 The club is open to Housatonic students who want to contribute their acting or writing.

“The club meets on  Tuesdays in which there is no show, and the writers meet every Thursday,” said Stewart.

One of the things that keeps the shows on the right path is the writing staff. They are in charge of coming up with scripts for the performers to use on stage.

Writing staff member Steve Horvath enjoys being a writer for the show, he’s in his first semester on as a part of the staff.

“It is a great way to hone an individual’s creative process,” said Horvath.

Some of the performers write their own material. For larger skits, some of the writers will work together to make sure the quality of the skit is very high.

“It is a good place to learn from each other since we all respect writing but are all good at different things,” said Horvath.

“It is cool to be in an environment where people push everyone to reach their full potential with their ideas,” said Rodriguez.

The other big part of the show is the acting. Without the actors, their would be no show.

Enrique Rivera, a Housatonic student, performs on all of the shows, and sometimes multiple times a show.

“Performing can be a magical experience. I never want to mess up, but I feel my most confident not thinking about it much,” said Rivera.

Rivera has nailed performances countless times, such as during an improv scene in the last performance.

“It is very rewarding to nail a performance, no matter how big or small it is,” said Rivera.

Rivera has also had performances where things have not gone as planned. In his most recent performances, he sang a rap song and forgot one of the lines.

“It’s sad to mess up but you can’t let it get to you,” said Rivera.