Many of Earth’s creatures can increase in length depending on the size of their habitat. Can the same be said for a student’s opportunities after expanding their learning space? We are about to find out.

On March 10, members of the student body and faculty gathered in the courtyard to celebrate the groundbreaking of the expansion of Lafayette Hall. They learned about a very special 50th birthday present HCC will be receiving in the fall of 2017. Four floors and 47,000 square feet of new space will be a $45 million gift shared by the entire HCC family. 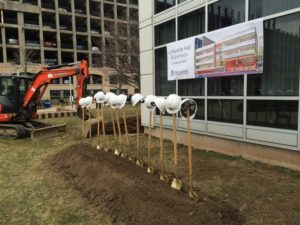 Hard hats and shovels before the Groundbreaking. (Photo by the author)

Though tall mounds of dirt, high fences, backhoes, and warning signs block a clear view of progress, the project is actually ahead of schedule.

After a beautiful rendition of our National Anthem sung by HCC’s own Flaure Sainville, honored speakers shared their hopes and plans for the future of HCC. Pasquale Salemi, State Department of Administrative Services Deputy Commissioner, described the design team’s focus on ensuring the new structure would be suitable for its future inhabitants.

The Art Department will finally be able to stretch their creative genius collectively in a space designed specifically for their talents and needs. The majority of the expansion will be comprised of glass, making it an ideal space for the display and creation of student art, along with some popular pieces from big names in the art world.

Salemi added that some of the other notable features in planning “include a new welcome center, student services suites, two multi-purpose spaces and several general classrooms.” He adds that for the convenience of students and faculty “a new vehicular drop off loop will be provided” at the west entrance. 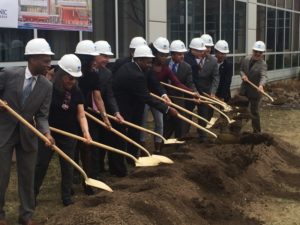 The opening of the new space will trigger a domino effect for departments involved in the renovation. Once the Art Department settles into its new home, the Science Department will be given room to expand into the vacated space.

Just beyond the main entrance of the new building, registrars, admissions, and the cashier will team up as a one stop shop, eliminating the hassles of bouncing around to different locations just to complete one task.

After the Registrar’s office moves, Media Services will depart from the library and take over the space that Registrar occupies now. Library Director Shelley Strohm said that “When Media Services is relocated it will make room in the library for three more study rooms with large screen computers, and a proper classroom with individual computers.”

The raising of this new structure is symbolic of HCC’s future growth.  Not only will the learning space grow, but so will the size of the student body, which is expected to increase to 8,000 over the next ten years, according to a “pre-design study” performed by the design team.

Though some of us may have moved on to a four-year school or settled into a career of our choosing by the time the construction is concluded, it’s a comfort to know that future students will utilize the enhancements made to higher learning at HCC.

At the groundbreaking ceremony Mark Ojakian, President of the Board of Regents for Higher Education, said “This expansion is part of our effort in making our community colleges more modern, more efficient, and better institutions while maintaining student learning, which is our number one priority.”