Ask a handful of people if they’ve seen Chris Rock’s Top Five, and you probably will get a handful of nos. I didn’t even watch it until about a month ago, although I wish I had given it a chance when it premiered. Rock directs, produces, and stars as comedian/recovering alcoholic Andre Allen in the film. It follows him and Rosario Dawson around Manhattan while she interviews him for a New York Times article. Dawson, who plays journalist Chelsea Brown, draws out a more personal side of Allen. He reveals several secrets to her, including the lowest point in his life. 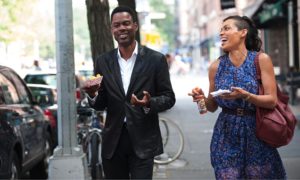 Andre Allen (Chris Rock) and Chelsea Brown (Rosario Dawson) get a bite to eat during the day’s adventure.

This film is likeable and entertaining, even if you have never watched anything Chris Rock related. For starters, it’s a joy to watch the budding romance between Allen and Brown. Their chemistry is obvious and sincere, which contrasts with Allen’s engagement to reality star Erica Long.

Gabrielle Union plays a very convincing vapid and shallow character in this role. Case in point/SPOILER ALERT: she exchanges the engagement ring Allen got her. Why on earth would someone do that? Her publicist thought something else would better suit the television premiere of their marriage. However she reveals a raw side of herself, admitting to Allen she needs him to marry her. She tells him she has no other talent. She can’t do comedy like him or anything else, so the reality persona is all she has.

That is one of my favorite parts of the film because I never thought about how reality stars honestly feel about their public lives behind the scenes. Also, this may be a crazy theory, but I can’t help but think Rock modeled his Allen-Long relationship after Kanye West and Kim Kardashian-West. I mean come on, famous Black entertainer gets married to the most wanted woman in America?!  Not too far off.

Another great feature of the film was the slew of cameos. Think of your favorite comedian. Now think of your second favorite. Now think of your parents’ favorite. They’re in there. Over a dozen of America’s most loved celebs make hilarious guest appearances. To name a few: Whoopi Goldberg, Jerry Seinfeld, Kevin Hart, Cedric the Entertainer, Sherri Shepherd, Adam Sandler, and the list goes on. Each actor and actress brings comedic gold to the table.

Insert personal bias here: as a fellow New Yorker, I appreciate that warm weather Manhattan was the stage for this hysterical debauchery. There were several cute floral print dresses to gaze upon while enjoying the show, but that’s just me.

The movie also showcases the highs and lows of being a journalist and a comic. For Brown, we watch her track down Allen in hopes of convincing him to do an interview. She obviously succeeds but absolutely needs her old school recorder to move forward. Editors are on her back and there’s mention of other harsh critics that Allen has had to endure in the past. Regarding Allen, he always had to be the class clown of Hollywood. He tried to venture off and do more serious work but it backfires on him because people want him to be funny. As a comedian at heart, he fears that he has lost it, which is why he refrained from stand up for nearly a decade.

Top Five is a great modern comedy (which is now streaming on Hulu.com). It has Manhattan romance, killer one liners, and two great plot twists. Chris Rock did an excellent job of filling 2014’s void of funny movies. My only regret is not seeing it sooner!