“We love you and we believe in you,” Rina Bakalar told the middle and high school students. She was lead consultant for the event’s planning committee with United Way of Coastal Fairfield County.

HCC’s Director of Student Activities Kelly Hope arranged for student volunteers from the college to sign up for four-hour shifts that day. 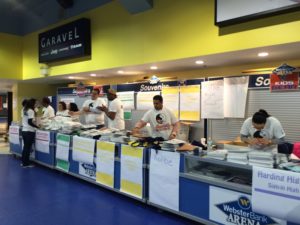 “It was a great opportunity for HCC students to give back to their community,” Hope said.

“The enthusiasm and commitment you displayed was unparalleled. I was truly humbled to witness the meaningful impact your presence had on our city’s youth,” she said.

A planning committee of more than 90 people met this past year to make the event possible. 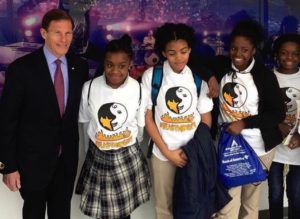 The inspiration for this enormous gathering came from a new community movement called “Bridgeport Prospers.”

The movement began in response to a 2010 Census finding that showed Connecticut had the seventh oldest population in the country.

The New England Public Policy Center reported, “…an important economic question about this trend is how a smaller working population can provide the continuing productive capacity to support a larger population of retirees.”

A city-wide discussion began about how to help the next generation. Leaders in the community organized a “Core Leadership Team” through the United Way of Coastal Fairfield County to make sure Bridgeport prospers in the coming years.

As a member of that team, Housatonic President Paul Broadie spoke at the youth summit. His engagement of young people themselves is part of the Bridgeport Prospers movement.

At the summit’s youth policy session, kids were asked what an ideal school would be like and what every neighborhood should have. Their answers will be given to Mayor Joseph P. Ganim, Bridgeport City Council, Bridgeport’s legislative delegation and Governor Dannel P. Malloy.