One Book, One College, One Event After Another

Amidst a constant slideshow of quotes from the top of Laura McBride’s web page, one in particular stands out. It materializes, shines brightly, then evaporates every twenty seconds. “Can’t wait for Housatonic Community College, Bridgeport, CT.”

If HCC is a family, then Laura McBride is an out of state cousin. The community college professor from Las Vegas, Nevada, appeared to be at home in her surroundings during her visit to HCC as part of HCC’s first One Book One College program. 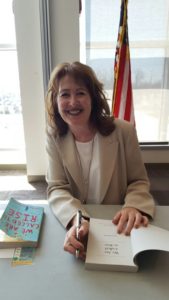 Laura McBride seated and ready to sign copies of her debut novel. (Photo by Eric Vazquez.)

From sharing teaching styles with HCC peers like English Professor Aubrey Moncrieffe, to fielding questions from curious college students, HCC was an environment that she seemed to acclimate to easily. 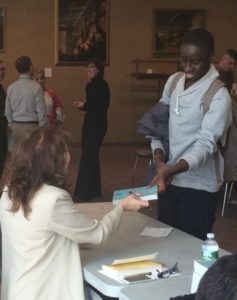 McBride has gained national recognition for her debut novel “We are Called to Rise”, the title of which is taken from a poem by Emily Dickinson. Told in several voices, each varying in perspective and featuring a multitude of social issues, McBride captures the confusion and heartbreak of daily life just as gracefully as she captures the reader from the first page.

The novel incorporates contrasting narratives from a middle-aged woman with marital problems, to a social worker trying to make a difference, to an injured soldier dealing with his new life, to a young boy juggling two cultures. It touches on issues ranging from political persecution, to poverty, to PTSD, with characters that are easily relatable despite their different ways of life.

HCC has organized several events in March and April that will concentrate on the topics raised in “We are Called to Rise”.

These were kicked off March 28, with a book discussion hosted by Professors Rebecca Adams and Eleanor Bloom in the Events Center at Beacon Hall. Students from their English 102 classes engaged in roundtable analysis of the novel and spoke candidly about their take on the text. 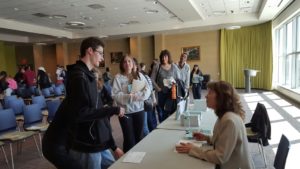 HCC students and staff wait with copy in hand. (Photo by Eric Vazquez.)

One student said aloud to the group “The book is very realistic, it’s not sugarcoated.”

Another said “There was a lot of imagery, it was easy to ‘see’ what was going on.”

On March 30 McBride spoke informally, in a classroom setting, about her novel, her inspirations, her difficulties, and her game plans. “Not just for creative writing but for any kind of writing that you do… There’s a process by which you think about it a lot, you create an idea, you have a structure, and then you also let your mind go, in order to get to the best stuff that you do.”

Later that day McBride gave an inspirational speech on her journey as an author and signed copies of her novel for students and staff, all the while smiling and engaging everyone she spoke to. 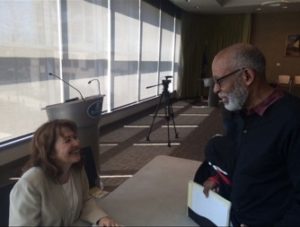 Every week in April HCC will be host to an open discussion on varying subjects that are present in the novel. All are held in the Events center and free to the public.

One Book One College has given HCC readers and writers an exclusive chance to pick the brain of a rising artist, and has designed forums for everyone to get involved in discussions of matters that matter right now.

To learn more about the One Book One College program and upcoming events, visit http://onebookonecollege.weebly.com/