Betzabeth Castro, a theater major and writing tutor, refuses to consider any profession outside of acting. Castro is nearing the completion of her third year at Housatonic. After being a general studies major for one semester she transferred into the Theatre Arts program. Pursuing a degree in theater with great enthusiasm. Castro said, “Theater literally encompasses me in one area.” 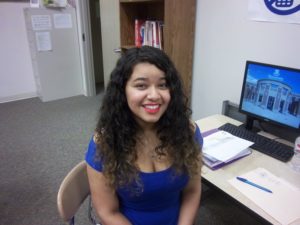 Photo by the author

To say that theater literally encompasses one’s self seems to be extreme and exaggerated. Castro, on the other hand, does not exaggerate. She doesn’t like watching television nor large screen movies. She says she only enjoys plays. “It is more human,” she adds.

This is partially due to the meanings behind the play’s plot: “The stories told have meaning. Not just explosions and stuff. Each play has a message and meaning.”

Delving for the meaning to this, Castro relates it to church with the actor taking the position of the preacher and each play being a sermon. It moves her and excites her allowing for people to learn a lesson which may heavily impact their life.

Castro explained this by summarizing “She Kills Monsters,” a play that Housatonic put on in the Spring 2015 semester, and which Castro performed in.

“While the play uses a fantasy related plot and setting, the deeper message is very relevant to modern and everyday life,” she says.

Castro’s view on stage plays shines a new light on the art people overlook. Though she enjoys to craft the props and stage pieces presenting a message in an this form of entertainment brings joy to Castro’s life, so much joy that simply explaining and conveying her feelings brought overwhelming passion to her face and gestures.

Broadway is not on her mind though. As a minor stereotype relating to the aspirations of stage performers, it is worth noting that Castro does not aim for this goal. Instead she is focusing on acquiring as much time in plays as she is able to. She claims that Broadway is a nice idea, but she is not counting on it.

What if Castro could not pursue a career in acting at all? “If I can’t act than I guess I’d teach acting,” she states with a sigh.

Anything she does must be involved with theater in one way or another, whether it be making stage props, working lighting, or script writing. It is Castro’s life’s dream and it is impossible to stop her from pursuing this unique and exciting dream.