SeaWorld Parks and Entertainment sent a major tidal wave of relief to animal advocacy groups and critics in March, announcing it would end its longtime breeding program of orca whales. 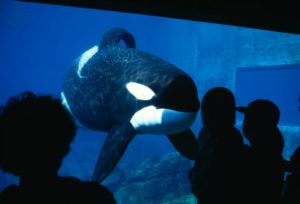 It has been three years since the release of the documentary Blackfish, which chronicled the deadly attacks of trainers by orca whales at ocean theme parks in the U.S.

The documentary underlines the tragic reality of domesticating orcas to support the theme park’s bottom line and was heavily criticized on social media by animal advocacy groups, who blasted SeaWorld for continuing the breeding program regardless of multiple trainer deaths.

In 2010, Dawn Brancheau, a trainer at SeaWorld in Orlando, Florida was killed by a killer whale named Tillikum. She was the third trainer killed by the whale in a 20-year period.

In early March, 2016, SeaWorld made international headlines when it released a statement on its website announcing it was ending its orca breeding program after 40 years in an effort to begin protecting ocean and marine animals.

Sara Almeida, an adjunct instructor of Biology at Housatonic, believes it’s no surprise Seaworld has decided to end its killer whale breeding program, but it’s most likely all for the wrong reasons, she said.

“They aren’t doing this because they ‘care’ about the animals in the program, they are exclusively concerned about their poor reputation and the declining stock and ticket sales.” Almeida said.

She said the public’s opinion of SeaWorld has really changed over the years thanks to social media campaigns and documentaries meant to educate people about animal abuse at theme parks.

“The conduct of SeaWorld in regards to its captive orca program has been widely criticized and the public has become educated on the vast drawbacks of breeding and performance programs.” she said.

Almeida feels the announcement is likely a result of people complaining about the treatment of animals and the resulting  dramatic drop in the theme park’s ticket sales.

“Ticket sales really matter to companies like SeaWorld because they can become financially hurt. If enough people protest a cruel and biologically unfeasible program like the one at SeaWorld, the company will bend to the public’s desire in order to re-frame their public image and regain ticket sales.” Almeida said.

She said people’s attitudes towards animal theme parks like SeaWorld have changed over the years, particularly in the way animals are treated.

“I think it is part of human nature to care about the welfare of others and most of us include non-human counterparts in that category. When people see mistreatment of animals, they usually speak up and then many people become unwilling to financially support poor animal husbandry practices like the ones observed at SeaWorld. It really speaks to our ability as a public to care and enact change,” she said.

As far as the practice of breeding and keeping animals, especially with the intent of profiting off of them for entertainment purposes, Almeida said it’s downright cruel.

“Wild animals should be kept in captivity if the purpose is to display them to entertain humans in any capacity like at zoos, circuses, traveling shows, and aquariums.  It destroys the population balance and natural ecosystems of the world.”

Almeida feels those who enjoy the thrill of observing their favorite animals should do so in that animal’s natural habitat,

“If future generations want to appreciate the wild things of the world, they should go out and find them,” she said.

“People can embark on eco-tourist trips, such as whale watching, or rain forest hikes.  Eco-tourism allows people to find wild animals in their natural habitats without making a large ecological footprint and it helps supports a country’s local economy, allowing them to profit off of preserving wildlife and the natural ecosystem as opposed to destroying it to over-fishing or planting coffee beans, for example.”

In a statement released on  its website SeaWorld noted that it will also begin introducing new orca encounters with orca whales rather than theatrical shows, as part of its ongoing commitment to education, marine science research and the rescue of marine animals.

The theme park said they plan on introducing the change first at their San Diego park next year, and then at their San Antonio and Orlando parks by 2019.