The Butterfly Behind the Mask

Written by Kaelin Baugh
Published on May 1, 2016

Don’t think of acting as an activity where you just dress up, recite lines, and hold props. Think of it as an escape from the real world, medicine to social anxiety, and a helpful way to enhance speaking skills.

If you’re a shy person with really great stage fright or simply someone that is not very comfortable with speaking to a crowd, acting is an activity that can uplift that social weight.

“It allows you to be someone else,” Lisa McCree, Theater/General Studies major, says.

Mcree started out as an actress and has produced acting projects in New York, Pennsylvania, Santa Cruz and Los Angeles.

She says, “When I’m allowed to be someone else, I allow my alter ego to take over.”

Logically speaking, being on stage portraying another person, is pretty comforting since you’re not showing your true self. You are hiding behind the character’s mask but not literally. So your true persona is being shielded by the fictional words and actions unleashed from the dramatis personae.

During the play or movie, the audience is not actually looking at you as the real person you are, they see you as the character you’re playing.

As the years went by, McCree came to realize that acting is not the cherry to her pie, but writing is. She states that she became more comfortable with writing and less comfortable with acting. She prefers to work behind the scenes and write the scripts rather than being in the stage’s spotlight. A small portion of the reason of her resignation from acting is that there were “not a lot of roles for African Americans” she says.

Another theatre student at HCC, Betzabeth Castro, shared her experience with acting and how it shaped her to become the person she is today. 20-year-old Castro is very passionate about acting. “I fall in love with theatre with every class I take and desire to do work in this field for the rest of my life,” she says. 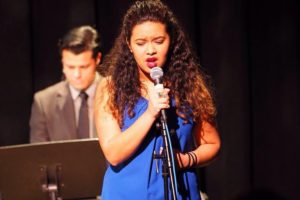 Betzabeth Castro singing at a musical. Photo by the author.

Castro has participated in musicals and plays in which some of them were at the Bijou Theatre just a couple blocks from HCC. She has played the role of Candy Starr in the play, One Flew Over the Cuckoo’s Nest.

“Acting requires being very vulnerable and doing what most people do in private, on stage, it has helped me become more open and free with my interactions with people,” she says.

Acting is a good way to express yourself through another person’s shoes of course, but you are still getting the benefit of interacting with other people in a relaxed and playful manner.

Castro admits that most people know her as an “outgoing, loud, friendly person,” but in class settings, she’s reserved and quiet. “I’ve noticed that I’m starting to speak. My biggest problem is that I’m very bad at confronting problems with my friends and family. I keep to myself but I started becoming more open with them and vulnerable with them,” she says.

She also states that acting has made it easier for her to emotionally connect with her loved ones. Castro deserves a high five for her genuine admiration for theatre. “I just want to… do what I love and keep growing and training.”