It’s Time to Hear from Our International Students

Written by Jessica James
Published on May 4, 2016

Leaving home and traveling to a new a country to pursue a degree can produce mixed feelings. Though the transition maybe something  that has been planned and prepped for, international students still undergo a culture shock. As a result they find ways to adapt and survive.

According to Merriam Webster dictionary, a culture shock is “a sense of confusion and uncertainty sometimes with feelings of anxiety that may affect people exposed to an alien culture or environment without adequate preparation.”

According to U.S Cultures Series: Introduction to American Life pamphlet, “ Most people experience culture shock in several stages: the Honeymoon stage, the Disintegration stages, the Reintegration stage and the Acceptance stage. The symptoms can last up to a couple days, weeks or maybe even months depending on how well one adapts to their new environment; phases are temporary.”

Through the process of preparing to come to the U.S., students have to make sure they have a plan. In most cases the plan consist of a student visa, healthcare, travel agents,  and communication techniques.

“For most international students, preparation for study has involved hard work and sacrifice,” says NAFSA: Association of International Educators.

There are students that come to the United States for a better lifestyle and then there are others that would like to go back to their country after they are done with school to make a difference.

“I’m here to get my degree in Management Information Systems and I just want to give back to Zambia. I want to provide reliable communication and computer services to the underdeveloped part of not only Zambia, but across the globe,” says John Kalyondo.

“As for me I am here to stay in the United States and get my degree in Psychology,” Carrriere says.

These students don’t just increase our global connections, they give U.S. students an opportunity to learn about how others live and think.

Students from other countries face new experiences and challenges. They realize the American culture is nothing like it is on screen. They also learn about what most Americans value, alongside with rules, behavior, social roles and climate.

“Being from Canada I thought the culture would be similar but it is not. The shock that I received was how the  people here are … The people here are less accepting of one another,” says Carrriere.

“I am still experiencing a culture shock but the first one I experienced was being taught by a gay professor. This is my third semester here at HCC and this is also the first American school I attended. Where I am from being gay is a taboo and here people are open about it. My family and friends told me to drop the class due to the professor’s sexuality , but I stayed in the class. In fact this professor opened my mind to understand and to also be acceptive of other people’s sexuality,” says Kaylondo.

Since a general guide cannot prepare most international students for what they will encounter, there are resources such as YouTube documentaries and campus support centers that can help guide the student through his or her experience.

The point is to make international students feel at home and welcomed in the United States and on campus too.

“The people here are pretty good and nice to me.  They don’t see me as a foreigner but as someone who is part of this country. The teachers are great and very professional. As of now HCC is allowing me to pursue my goal which is to have an American recognized degree,” says Mactar Sarr from Senegal West Africa. 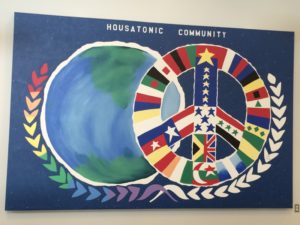 Kalyondo and Carriere are the Center’s volunteers. Their goal is to welcome international students and give them a place where they can feel comfortable to speak about their experiences and to also help the students adjust.